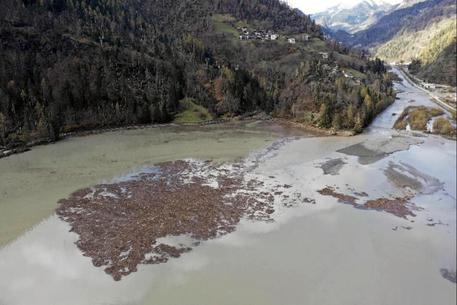 (ANSA) - Belluno, November 2 - A number of towns and villages were cut off Friday after torrential rain caused a landslide near Belluno in the far north of Italy.
The mass of earth and mud completely blocked the regional road 203 linking Cencenighe and Agordo. The municipalities to the north of the slide were completely cut off, as rain continued to fall incessantly in the area.
The wider Veneto region was counting storm damage of over one billion euros, as the extreme weather returned with a vengeance.
"We are on our knees, we have already scheduled the closure of all the schools," said Veneto Governor Luca Zaia. Zaia has proposed suspending taxes and mortgage payments for the storm-hit, as has Liguria Governor Giovanni Toti.
Economy Undersecretary Laura Castelli responded Friday that taxes and other levies would be stopped in the two northern Italian regions.
Deputy Transport Minister Eduardo Rixi said there had been 20 million euros' worth of damage to Portofino and Santa Margherita Ligure.
A wave of unrelenting bad weather has caused at least 15 deaths since Sunday, and now snow has reached some parts.
Trees have been felled, rivers have broken their banks, and winds have sent debris flying around all over the country, from north to south.
The death toll of the wave of extreme weather that is lashing Italy climbed to 15 on Friday, sources said - after St Mark's basilica in Venice had been damaged by the highest acqua alta in years on Monday.
Schools in many cities are closed again on Friday.
Falling trees have been the cause of many of the deaths and of major disruption.
There were four further deaths on Thursday. In the northern Trentino Alto Adige region, a man fell to his death while repairing a wind-damaged roof and another died in hospital from injuries sustained on Monday when his car crashed into fallen trees, ANSA sources reported.
As well, an elderly couple was crushed to death in their car by a falling tree in the northern Val D'Aosta region.
As well as Veneto, Liguria has been brought to its knees by the storms and a third of its olive crop has been lost.
Also in Liguria, violent waves and winds broke very many large luxury yachts away from their berths and slammed them into the coastline at the private Carlo Riva Marina at Rapallo, near Genoa.
Of the 390 yachts in the marina, half were destroyed, marina director Marina Scarpino said.
In Venice, St Mark's Basilica was damaged by Monday's exceptionally high acqua alta in the lagoon city, the First Procurator of St Mark's, Carlo Alberto Tesserin, said.
The high water submerged some tens of square metres of the thousand-year-old marble mosaic floor opposite the altar of the Madonna Nicopeia and completely inundated the Baptistery and the Zen Chapel, he said.
The water reached a depth of 90 centimetres above the mosaic flooring of the Nartece, washing up against the monumental Byzantine doors, the columns and the marbles, he said.