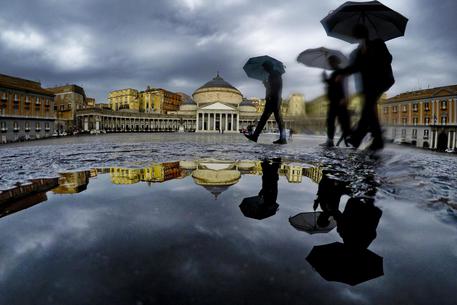 (ANSA) - Rome, October 22 - The Italian Civil Protection department has issued an orange warning for bad weather in four regions of the country, with nearly the entire south under a yellow warning, according to Epson Meteo weather service.
It said the Civil Protection has issued "moderately critical" (orange) warnings for storm risk in Basilicata and Molise and hydrogeological risk in Campania and Puglia.
A yellow alert is in place for storm, flooding, and hydrogeological risk in Abruzzo, Calabria, Lazio, Molise, Puglia and Sicily.
Temperatures are expected to rise on Tuesday.
Italy was lashed by hail and rain on Sunday night and Monday morning, causing flooding, fallen trees, stranded drivers, and in Rome, snow-like road surfaces in some areas.
Farmers' association Coldiretti called it a "calamity for Italian farming" with millions of euros in losses.
It said hailstorms are the most feared weather event this time of year due to their ability to wipe out an entire year's harvest in a matter of minutes.
It said in the region of Lazio, violent hailstorms in Palombara and Nerola destroyed the last of the olives that had survived the spring freeze.
In Benevento, in the region of Campania, as well as in Pescara, in the Abruzzo region, schools were ordered closed on Monday due to the heavy rainfall.
On the island of Capri, flooding and high winds led to a downed tree and a collapsed wall, but vessels were still running to the island on Monday, despite high winds.
Firefighters in Palermo worked to clear downed trees and assist stranded motorists due to flooding.