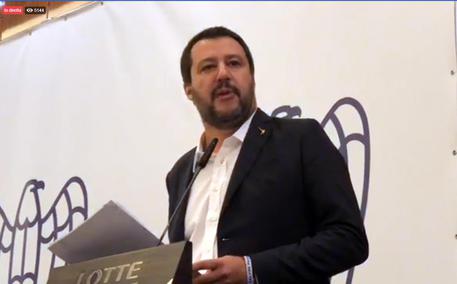 (ANSA) - Moscow, October 17 - Sanctions against Russia are "economic, social and cultural madness", Deputy Premier Matteo Salvini told Russian industrialists in Moscow on Wednesday.
"I come here free of charge because I think the sanctions are economic, social and cultural madness", he said.
Salvini also called the sanctions "an absurdity".
Asked if Italy might veto the renewal of the sanctions at the EU, Salvini said "we can only use once the trump card of the veto in Europe".
"There's the question of the EU budget, the question of migration, and the budget, which I don't know what to play if they reject it but we'll carry on all the same..." He said an assessment of what was most in Italian interests would be made. "We are counting on the fact that they are intelligent enough in Brussels to understand that they have gone over the top and that you have to return to good relations between the EU, Italy and Russia".
"If someone made a mistake that person will have to pay but making hundreds of millions of citizens and small and medium businessmen pay is madness, I think".
The interior minister and leader of the anti-migrant Euroskeptic League party added: "I feel at home in Russia while I don't in other European countries".
He said: "the problems of 2018 are to be solved sitting at a table and not with tanks at the borders".