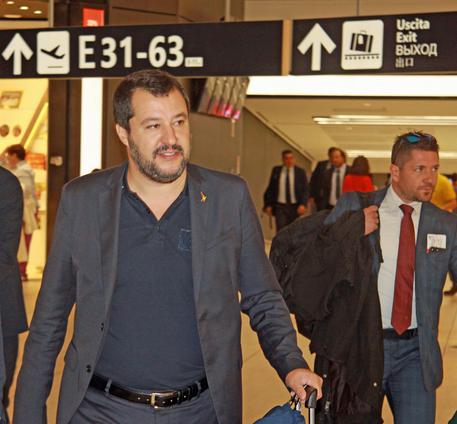 (ANSA) - Moscow, October 17 - Deputy Premier and Interior Minister Matteo Salvini has said that next year's European elections will usher in huge changes in the political situation within the European Union. "The next European elections will start epochal changes for the future of Europe," Salvini, the leader of the rightwing League party, said in an interview with TASS ahead of his participation in the assembly of Russia's industrial confederation on Wednesday. "Our opponents says a catastrophe is coming, but this only regards their personal interests.
"The peoples of Europe will have an unprecedented opportunity to create a new Union of sovereign territories based on democratic principles". Salvini said the League-5-Star Movement government was not going to be pushed around, amid criticism from the European Commission of its plan to allow Italy's budget deficit to rise to 2.4% of GDP next year. "I am increasingly convinced that the financial lobbies in Brussels cannot accept our presence in the government," he said.
"This reaction does not surprise me. "They have manipulated puppets for years, but now they are forced to deal with two political movements that they cannot blackmail because they don't own anything to anyone, but defend the interests of their people". He also repeated his criticism of Western sanctions on Russia.
"Maintaining good relations with Russia is a natural component of the national interest for us," he said. "Unfortunately, the deterioration in diplomatic relations between the USA, some European countries, and Russia is a complicated problem for Italy, which depends on its membership of certain international structures like the European Union and NATO.
"We will work to overcome every disagreement but it will take time.
"The sanctions on Russia are absurd and we will try to convince our partners".