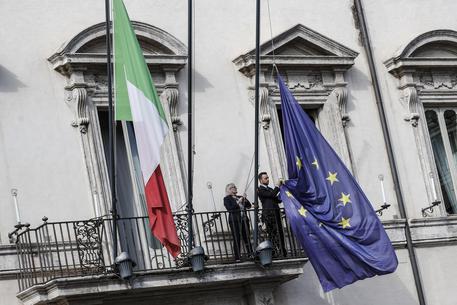 (ANSA) - Brussels, October 17 - In Italy 65% of people are in favour of the euro, but far fewer, only 43%, are convinced about the benefits of belonging to the European Union, according to the latest Eurobarometer survey. The is well down on the European average of 68% who believe their countries benefit from being in the EU. Furthermore, if Italy held a referendum on EU membership, only 44% said they would vote to remain, compared to an EU average of 66%, according to the poll conducted between September 8 and 26, 2018, by Kantar Public.
This is the lowest level in the EU, lower even than in Britain, where 53% today are in favour of remaining, over two years after the UK voted to leave the bloc. The percentage of people who said they were undecided about how they would vote in an EU referendum was 32% - the highest in the bloc.
Only 17% of the Europeans interviewed said they were in favour of their countries' leaving the EU.
Even in Britain, today only 35% are in favour of leaving, according to the study.