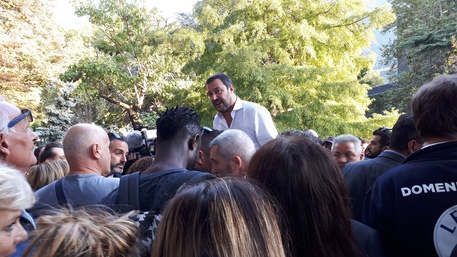 (ANSA) - Rome, October 16 - Deputy Premier and Interior Minister Matteo Salvini said Tuesday that Italy had not accepted Paris's apology after a French gendarmery police van was seen dropping off two men in woods on Friday near the border at Claviere - as Italian prosecutors said they were investigating a second such incident. The men are suspected of being migrants of African origin. A French official said the incident was a "mistake" committed by two officers who were new to the area. "Abandoning immigrants in an Italian forest cannot be considered a mistake or an incident," Salvini said.
"What happened in Claviere is an unprecedented offence against our country and I wonder whether the international organizations - starting with the UN and Europe - find it 'sickening' to leave people in an isolated area with no assistance.
"We are faced with an international shame and Mr (Emmanuel) Macron cannot pretend nothing has happened.
"We don't accept the apology". Meanwhile Turin prosecutors said they were investigating another French foray to Claviere in August, when French officers allegedly checked up on two Italians living there.
The Italians were checked by four armed men in camouflage jackets who were "in all likelihood French", said Turin Chief Prosecutor Armando Spataro.
The incident took lace on August 2 and was reported by Carabinieri on August 20, he said.