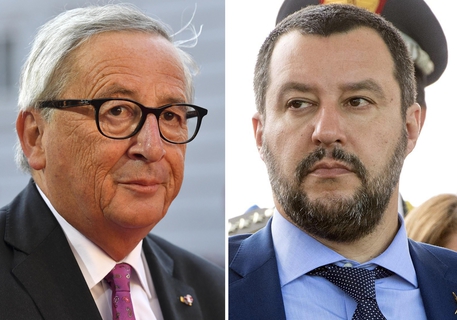 (ANSA) - Rome, October 2 - Interior Minister and Deputy Premier Matteo Salvini said Tuesday "I talk to sober people who don't make comparisons that aren't here nor there" when asked abut European Commission President Jean-Claude Juncker's suggestion Italy might pose a Greece-like threat to the euro.
Salvini also said Juncker should drink two glasses of water before talking about Italy's debt risks.
Juncker has "sent the spread crazy" by likening Italy to Greece and "could have spared us the comparison", Salvini, leader of the anti-migrant Euroskeptic League party, said Tuesday.
"The European Commission President Juncker, by equating Italy with Greece, sends the spread crazy. He could have spared us that," Salvini said at a meeting of Naples' public order and security committee.
"He should drink two glasses of water before opening his mouth, and stop spreading non-existent threats.
"Or we'll ask him for damages".
Salvini insisted that the Italian government will ask for damages from "those who wish Italy ill" like Juncker and "other European bureaucrats" whose "threats continue to drive up the spread".
"The words and threats of Juncker and other European bureaucrats continue to make the spread rise, with the aim of attacking the government and the Italian economy," said the deputy premier.
"We are ready to ask damages from those who wish Italy ill," said Salvini. The other deputy premier, Luigi Di Maio, said it is now "clear to everyone that Juncker is unfit to play his role as European Commission President."
Di Maio wondered "why everyone feels entitled to preach to us, who have set a deficit/GDP ratio of 2.4%, but not countries that have a ratio of 2.8% (like France)."
He added: "the continual violations of German exports which for years and years have violated the common rules.
"Also in that case only silence form the Commission".    Financial markets remained nervous about Italy's budget Tuesday as the EU took a tough stance - but the Italian government said it wasn't going to budge "one millimetre" on a 2.4% deficit-to-GDP ratio for thr next three years.

Juncker said Monday night the EC had to apply the rules on the Italian budget or else it might spell "the end of the euro", according to Brussels sources.
European Commission Vice President Valdis Dombrovskis said Tuesday that Italy could face EU sanctions if it goes through with plans to have a budget deficit of 2.4%. "The Commission introduced a communication on the use of flexibility and Italy is the country that has most benefited," Dombrovskis said when asked to clarify Juncker's comments on Rome's budget plans.
"Now the problem is that the discussions on the draft budget are going in a direction that substantially goes beyond this flexibility and Juncker said that we must apply the rules of the (Stability and Growth) Pact.
"And that is what the Commission is ready to do".
Labour and Industry Minister Luigi Di Maio said that "we won't go back a millimetre" when asked about the rise in Italy's bond spread since the government announced it intends to let the deficit rise to 2.4%. "If necessary we'll explain the budget on the streets," the 5-Star Movement (M5S) leader told RTL 102.5 , adding the government was "united". He said that he did not think the European Commission's criticism of the budget plans was part of a "plot" to bring down the M5S-League government. He added, however, that they "must not give blows below the belt", saying Juncker and other Commissioners commented when Italy's bond spread had started to drop.
Di Maio said that EU officials were "prejudiced" against a budget with a 2.4% deficit when other countries had gone even higher. "This 2.4% is scandalous while others before us did everything they wanted: now they're criticising our budget without even having read it, I have to think there's a prejudice", he said.
"Threats will not stop us," he added.
Di Maio said Juncker and European commissioners had "made statements to create tension and markets are sensitive to the words of EU commissioners".
"But at least they should read the DEF (economic blueprint) first.
"Yesterday someone was unhappy the spread hadn't risen to 350 so the commissioners made their statements".
He said the market reaction was "much more due to these gentlemen than to the action of the government".
Di Maio said "we'll give the deficit back next year, because with cuts and growth we'll lower debt".
He said "we'll have a bit of deficit for once, not to save banks, but so as not to kill citizens and entrepreneurs."