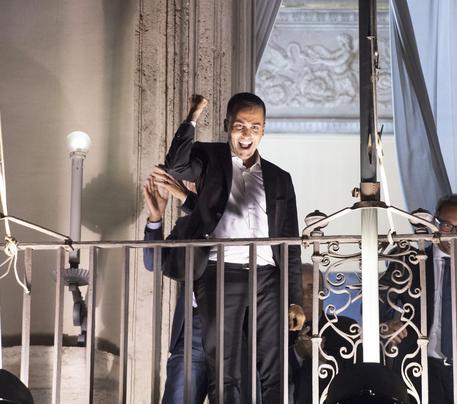 (ANSA) - Milan, September 28 - The Milan stock exchange suffered big losses and Italy's bond spread shot up on Friday after the government said it would increase government spending and allow the deficit-to-GDP ratio to rise to 2.4% over the next three years from an initial figure for next year of 0.8%.
But Deputy Premier Matteo Salvini said the government would press on even if the European Commission gives the budget, with its larger-than-expected deficit, a thumbs down.
The Milan stock exchange's FTSE Mib index shed 3.72%, with bank stocks hit particularly hard.
Some 22 billion euros in share capital went up in smoke due to the market's dim view of Italy's first populist government's first budget.
The spread between Italy's 10-year BTP bond and the German Bund closed up 32 points on 267 basis points on Friday, with the yield on the BTP up to 3.13%.
Earlier in the day it had risen to 281.
The spread closed on 235 points on Thursday. Interior Minister Salvini shrugged off concerns about the response of the financial markets. "The markets will have to deal with it," Salvini said, describing the government's DEF economic blueprint as "a step toward civilization". Anti-migrant Euroskeptic League leader Salvini added that the government would "press on" if the EC gives the thumbs down to the budget package because of the deficit figure. "We consider ourselves to be working for the country's growth, to give back faith, hope, energy and work," Salvini said. "So I'm happy with what we've done over the last four months and what we will do over the next four years".
The other deputy premier, anti-establishment 5-Star Movement (M5S) leader Luigi Di Maio, said Friday that the government was not looking for a fight with the Commission.
"Now dialogue will start with the EU and the big private investors and we do not intend to have a clash," Labour and Industry Minister Di Maio said.
He said European Economic Affairs Commissioner Pierre Moscovici's warning about debt was part of that dialogue.
"The concerns are legitimate, but the government is committed to keeping the deficit-to-GDP ratio at 2.4% and we want to pay the debt... the debt will come down," Di Maio said. A deficit of 2.4% is well above the target of 1.6% for 2018 that the Commission agreed with the previous centre-left government and three-times the 0.8% deficit pencilled in for 2019.
Technocrat Economy Minister Giovanni Tria is said to have wanted to keep the deficit under 2% but he seems to have caved in to pressure from the M5S and its government coalition partner, Salvini's League party.
Both Di Maio and Salvini have hailed the budget's inclusion of first steps towards a universal basic income, the M5S's flagship pledge, and an overhaul of the unpopular 2011 Fornero pension reform, the League's hobby-horse, as well as tax cuts.
In a move towards a dual-rate flat tax for everyone, another key League vow, the budget slashes the tax rate on the self-employed to 15%.
Di Maio said he was not concerned about losses on the Milan stock exchange and rises in Italy's bond spread in response to the deficit.
"I'm not worried because over the next few days we want to meet all the private and public entities that represent the market and reiterate that the 2.4% contains 15 billion euros of investment - the biggest investment plan Italy has ever had," he said.
Moscovici said earlier Friday that debt makes nations poorer.
"I want to continue dialogue with the Italian authorities, saying that respecting the rules is not for us, it's for them, because when a country gets into debt, it makes itself poorer," Moscovici told French TV network BFM. "If the Italian people continue to get into debt, what will happen? Interest rates will increase and servicing the debt will cost more.
"The Italian people must not be mistaken - every euro more of debt is a euro less for highways, for schools, for social justice". The Commissioner stressed, however, that he does not want a showdown with Italy over the budget.
"It's likely that the structural deficit will increase and we have various (possible) responses (once we have evaluated the budget)," Moscovici said.
"But my reflection this morning is a simple one - we have no interest in a crisis between the Commission and Italy. "Sanctions are theoretically possible, they are foreseen in the treaties, but sanctions are not my spirit and they never have been.
"The rules should be respected and these rules are not stupid. If the debt rises, we create an unstable situation".
Premier Giuseppe Conte said Friday Premier Giuseppe Conte said Friday that the spread will fall when markets get to know the etails of the 2019 budget bill.
Conte added "we want to cut debt but with growth".
"I not fear an EU rejection" of the budget," he said.
He also said the resignation of Economy Minister Tria had never been on the cards and the government would "last until 2023".
When asked about President Sergio Mattarella's rumoured intervention to persuade Tria to stay on to calm the markets, Conte urged journalists not to set up the president as a "counterpoint" to the government.
Asked about Moscovici's stressing the importance of cutting debt, Conte said "I don't look to the expectations of EU commissioners".
Conte added that Italy was in "dialogue" with the EU and stressed "we're not a problem for Europe".
He added that reform of of public contracts will be launched "within a month".
European Commission Vice President for the Euro Valdis Dombrovskis said Friday Italy was breaking EU budget rules.
"What has emerged this far from the discussion in Italy does not appear to be in line with the Stability Pact," he said.
"It is important that Italy keeps to responsible budget policies to keep (interest) rates low".