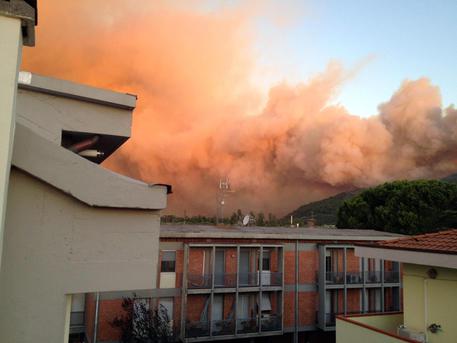 (ANSA) - Pisa, September 25 - Around 700 people have been evacuated from their homes after a huge wild fire destroyed hundreds of hectares of forest on Monte Serra, in the province of Pisa. Arson is suspected to be the cause.
Strong gusts of wind that frequently change direction have made fighting the fire even more difficult.
Canadair aircraft are being used as part of the effort to combat the blaze. "The firefighters were our angels," said Paola, one of the evacuees who spent the night at a reception centre set up inside a gym in the town of Calci.
"It was an apocalyptic scene and luckily they brought us here to safety. "I hope this fire was caused by carelessness because I can't imagine anyone would be so bad, would have such a perverse mind (to start it deliberately).
"There are whole olive groves that have been destroyed and huge damage. I fear homes have gone too".
Tuscany Governor Enrico Rossi said that around 600 hectares of land have gone up in smoke, according to initial estimates. Rossi spoke to journalists along with Calci Mayor Massimiliano Ghimenti after they met people evacuated from their homes.
They said the evacuees will not be able to return to their homes until Wednesday afternoon because of the smoke and the need to keep the area clear for firefighting operations.