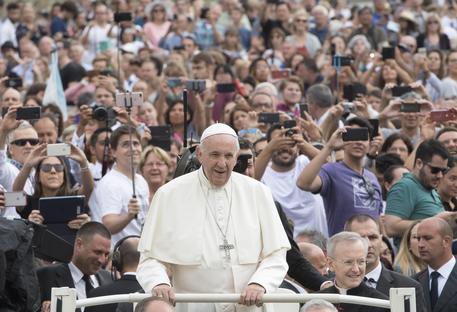 (ANSA) - Vatican City, September 20 - Pope Francis on Thursday warned that attitudes that many thought were a thing of the past, such as racism, are taking new life and can inspire acts of intolerance and discrimination, urging politicians not to exploit fears against immigrants "We are living in times in which feelings that many thought had passed are taking new life and spreading", the pontiff told an international conference on "Xenophobia, racism and populist nationalism in the context of world migrations" promoted by the Vatican's Dicastery for Integral Human Development.
The pope cited, in particular, "feelings of suspicion, fear, contempt and even hatred towards individuals or groups judged for their ethnic, national or religious identity and, as such, considered not sufficiently worthy of being fully part of society's life".
He added that such feelings "too often inspire real acts of intolerance, discrimination or exclusion".
The pope also warned political leaders not to exploit the fear and difficulties of certain groups.
"Unfortunately, it also happens that in the world of politics" some give in to the "temptation of exploiting the fears and objective difficulties of some groups, using illusory promises for short-sighted electoral interests". Francis continued saying that "those who take economic advantage of the climate of distrust in foreigners", fostering a system of insecurity and exploitation - "sometimes at such a level to create real forms of slavery - should search deep into their own conscience, knowing that one day they will have to respond to God for the choices they made".