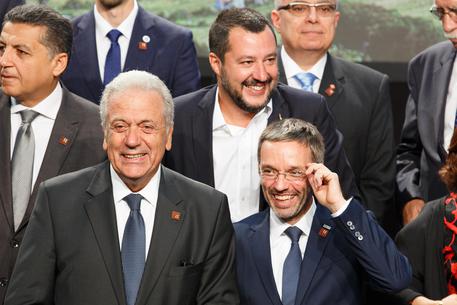 (ANSA) - Vienna, September 14 - Italian Deputy Premier and Interior Minister Matteo Salvini said Friday that he was ready to sign an agreement with Germany on the return of migrants if Berlin help it get the terms of the Sophia mission in the Mediterranean overhauled.
Salvini, who has spearheaded the new government's tough stance on migration which has seen NGO-run rescue ships denied access to Italy's ports, says Sophia placed too much of the burden for receiving asylum seekers saved at sea on Italy.
The German government said that it reached a deal with Rome for the return of migrants registered in Italy at the German border but Salvini said Thursday that the agreement has not yet been finalised.
"The agreement with Germany, which I have not signed yet, will be limited to November and will be at zero cost," Salvini said regarding the deal that would see Germany accepting one rescued migrant from Italy for each one it turns back.
"It won't regard past cases and it will be signed if Germany gives us a hand on changing the rules of the Sophia mission, which, because of the government of (ex-premier Matteo) Renzi, has seen 45,000 people disembark in Italy.
"I'm ready to sign, but it must be favourable to us".