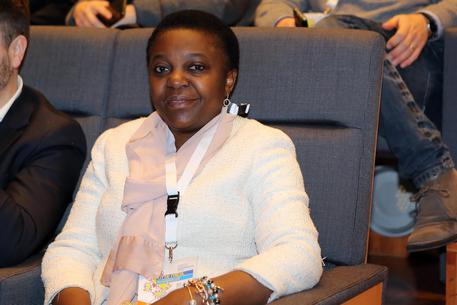 (ANSA) - Piacenza, September 14 - Centre-left opposition Democratic Party (PD) MEP Cecile Kyenge, formerly Italy's first black minister, went on trial Thursday for calling the anti-migrant League party racist.
The trial of Kyenge, once likened to an orangutan by a League heavyweight, is the result of a libel suit filed by League leader Matteo Salvini.
During a PD supporters' yearly get-together in Parma, Kyenge said the League was a "racist" party.
The League, while pursuing a crackdown on migrants, has always denied it is racist.
Sending her to trial in January, preliminary investigations judge Stefania Di Rienzo said Kyenge had implicitly compared the League to the Nazis.
Kyenge has been the target of League abuse for years.
Last year, when the League was still called the Northern League, MEP Mario Borghezio was ordered to pay the Congo-born former integration minister Cecile Kyenge 50,000 euros in compensation for a racist slur.
"I can't afford it, I'll have to sell my house," commented Borghezio, who has a history of controversial anti-immigrant remarks and actions.
Borghezio, interviewed on April 29, 2013 after Kyenge's appointment, reportedly said among other things that "Africans are Africans and belong to an ethnic group very different from ours".
He also complained that Kyenge, who was educated in Italy to become an ophthalmologist, had taken away a health post that he said should have been given to "some Italian doctor".
In another remark that was not covered by last year's verdict, Borghezio claimed Kyenge would impose her "tribal traditions" from the Congo on Italy.
"This is a bonga bonga government, they want to change birthright citizenship laws and Kyenge wants to impose her tribal traditions from the Congo," said Borghezio.
Other politicians with the Northern League have faced legal action for comments against Kyenge.
Former Senator Ermino Boso, interviewed a few days after Borghezio on May 1, 2013, reportedly said Kyenge should have "stayed home in the Congo".
In November 2013 Northern League Senator and former minister Roberto Calderoli was charged with defamation aggravated by racial discrimination after he compared Kyenge to an orangutan.
That remark by Calderoli was one of the first and probably the worst, but not the only such slur against the eye doctor.
Earlier in 2013 Northern League Padua Councillor Dolores Valandro posted on Facebook that someone should rape Kyenge "so she knows what it feels like" in response to a report of an Italian woman who was allegedly raped by an African man.
Borghezio has a track record of anti-immigrant acts.
In 2000 he was lampooned on TV for his efforts to clean up, with dusters and spray, trains allegedly used by foreign prostitutes and immigrants.
Kyenge recalled several episodes of alleged League racism on social media Friday, saying "is the League racist? Judge for yourselves".
She posted headlines including When Salvini Sang: 'Smell the Stink, the Neapolitans are Coming'; Calderoli: When I See Kyenge I think of an Orangutan; League: Separate Carriages For Non-EU Migrants; and Borghezio: 'Bonga Bonga Government: Kyenge A F**king Bad Choice'.