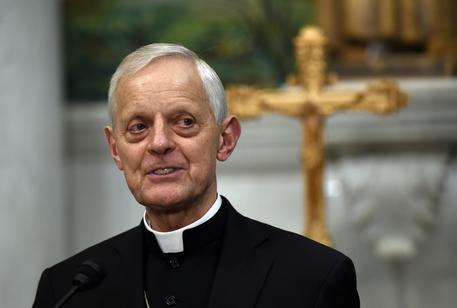 (ANSA) - New York, September 12 - Cardinal Donald Wuerl, the Roman Catholic archbishop of Washington under fire for alleged inaction over clerical sex abuse, has sent a letter to his priests saying he will discuss his resignation with Pope Francis in Rome soon.
The news came as Francis on Wednesday called the world's bishops' heads to a conference in the Vatican next February on preventing clerical sex abuse.
Wuerl is one of the high-ranking clerics near Pope Francis accused in a letter by former Washington nuncio Carlo Maria Viganò.
Since mid-August, the former archbishop of Pittsburg Wuerl has been at the center of heated debate calling for him to resign after accounts of his allowing several priests accused of sexually abusing children to remain in ministry. The accounts were included in a grand jury report last month in Pennsylvania that accused over 300 priests of abuse.
Alongside other US-based allies of the Pope, Wuerl has been accused of covering up the sexual abuse of children committed by his predecessor in the capital, Theodore McCarrick.
Close to both the former and the present popes, 77-year-old Wuerl had offered to leave the ministry when he turned 75 due to age limits but Pope Francis had opted to keep him in his position. The cardinal had in recent days visited the Vatican to discuss the situation with the Pope, who told him to go back to Washington to assess the issue with his priests.
Viganò's letter calling for the pope to resign has sparked a fresh row between conservatives and liberals in the Church.
The pope meanwhile on Wednesday called the heads of the world's bishops' conferences to a meeting in the Vatican from February 21 to 24, to "discuss the prevention of abuse on minors and vulnerable adults", the deputy head of the Vatican press office, Paloma Garcia Ovejero, said, reading a statement from the Council of Cardinals (C9).
The pope's move comes amid a row sparked by Viganò's claim that Francis and top bishops covered for McCarrick.
Viganò said the pope should resign for allegedly not implementing alleged sanctions on the former cardinal.
The pope has not dignified Viganò's charges with a denial but is said to be "embittered" by them.
The Church has been roiled by abuse scandals for decades, the latest in Pennsylvania where over 1,000 minors were allegedly raped by 300 priests over the course of 70 years.
Msgr Georg Gaenswein, the personal secretary of former pope Benedict XVI, on Tuesday compared the crisis the Catholic Church is enduring due to sex abuse scandals to the impact of the September 11 terrorist attacks.
"Today is September 11, the date of an apocalyptic disaster and the Church is looking at its own September 11, full of dismay, above all, following the Pennsylvania grand jury report," Gaenswein said during an encounter at the Lower House.
"This catastrophe of ours is linked to many days and years and to countless victims".
Gaenswein said that during his papacy, Benedict repeatedly denounced the gravity of paedophilia, calling it an attack on the Church from within.
On Monday Pope Francis' nine top cardinal advisers, the C9, said the Holy See was preparing the "necessary clarifications" about Viganò's charges in the McCarrick affair.
On September 3 Francis called for silence and prayer as "some people seek only scandal".
He did not refer to the Viganò scandal directly but said the only way forward was one of "prayer and silence".
Some people, he said, "seek only scandal, they seek only division".
Gaenswein has said Benedict has not confirmed the content of the letter from Viganò saying Francis covered up sex crimes by McCarrick and should resign.
Gaenswein called a report that Benedict had backed Viganò "fake news, a lie".
He said the pope emeritus had not commented on the letter and would not do so in future either.
Pope Francis is "embittered" by Viganò's letter, Vaticanm sources told ANSA earlier this month Viganò said in the document that Francis had protected McCarrick, who is accused of having sex with adult seminarians and groping a 17-year-old boy.
The pope is not considering resigning, however, the sources said.
Viganò said he told Francis about McCarrick in 2013, saying the prelate had been sanctioned by Benedict, but Francis did nothing about it.
Francis has said he will not respond to Viganò's charges and has said journalists should be able to work out the truth in the affair.
The case has pitted conservative critics of Francis against progressive supporters who say the traditionalists are "weaponising" child abuse to attack the pope's mercy-over-morals approach.
Viganò also claimed there was a powerful gay lobby in the Church he blamed for the many scandals on abuse and cover-ups, naming names.
Viganò, who was previously involved in the Vatileaks case, has said that he was not pursuing a vendetta for having been replaced as nuncio to the US in 2016, or previously losing his place in the Vatican government.
"I have never had feelings of revenge or rancour in all these years," he said.
He denied being a "poison-pen letter writer", saying "I am accustomed to doing things in the light of day." Viganò is one of the conservatives who have criticised Francis for opening up to gays and remarried divorcés while denouncing 'clericalism', unfettered capitalism and climate change, among other liberal moves.
The minors' protection board of the Italian Bishops Conference (CEI) on Tuesday saw eye to eye with a corresponding Vatican panel on a series of moves to stop clerical sex abuse of kids, a CEI spokesman said Wednesday.
Listening to victims, new commitments to education, training and communication, and drafting new guidelines on protecting minors and vulnerable adults were among the moves discussed, said Father Ivan Maffeis.
He called the joint work "substantive collaboration which aims above all at the elaboration of proposals, initiatives and instruments of prevention to offer dioceses.
"So as not to stop at condemning the abuse and to promote a culture of the person and their dignity".