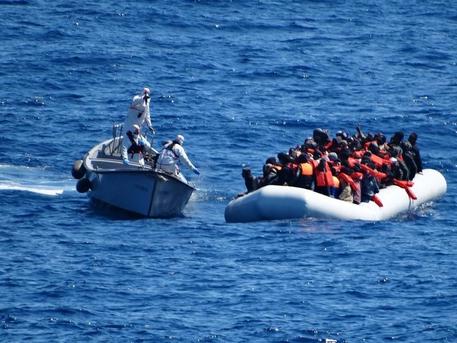 (ANSA) - Rome, August 30 - Italy on Thursday said it might leave the EU anti-human trafficking Sophia mission in the Mediterranean unless there was a deal among EU members to have rescued migrants land at other ports beside Italian ones.
Interior Minister Matteo Salvini said Italy was "assessing" whether to continue the EU's Sophia mission which currently lands all rescued migrants in Italian ports.
Defence Minister Elisabetta Trenta voiced disappointment Thursday at drawing a blank on Italy's proposal to change the Sophia mission's landing rules so that other countries besides Italy can take migrants.
"I feel disappointed because I've seen that Europe is not here but I'm confident", she said after a defence ministers' meeting.
"We will assess what to do" after no agreement was reached on changing Sophia's port of landing rules.
"All decisions will be taken with the government and Premier (Giuseppe) Conte", she said when asked whether Italy would leave the mission.
Trenta voiced the hope that things might change at an EU foreign ministers' meeting Friday.
"I've found open doors, but also closed ones," she said.
European Union High Representative for Foreign Affairs Federica Mogherini said "there is no consensus on practical solutions" on the proposed Sophia mission changes.
She said she hoped for a concrete result on possibly changing the Sophia mission's landing rules to help Italy in the coming weeks.
"I hope for a concrete result in the coming weeks," she said after EU defence ministers failed to agree on the issue.
"It is not and will not be am easy exercise but it is a duty, because in these last few years we have proved that the EU can make a difference in the Mediterranean".
She said "losing this asset would be a big step backwards for the member States and the whole EU".