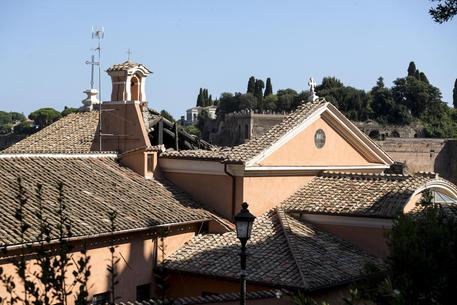 (ANSA) - Rome, August 30 - A church roof collapsed in central Rome Thursday spurring reports that the underlying ancient Roman Mamertine Prison had been damaged too - reports that proved to be incorrect.
The roof collapse has not caused any damage to the prison, Rome Special Superintendent Francesco Prosperetti said.
Between the Church of San Giuseppe dei Falegnami and the former jail, he explained, there is the intervening Chapel of the Crucifix.
It was the latter that had been damaged, he said.
But he said the damage was "negligible".
Earlier reports said the most famed and infamous prison of ancient Rome had been hot by falling roof fragments.
No one was hurt because the church was, as usual, closed at the time of the accident. The vault of San Giuseppe dei Falegnami (St Joseph of the Carpenters), at the Roman forum, caved in. The church is usually closed and only opened for weddings.
It was built between the end of the 16th century and the start of the 17th.
A fire-service crane has got rid of some remaining hanging parts of the caved-in roof. The wooden beams, which are still standing, are visible through the wreckage.
The inside of the church is full of broken beams and rubble, fire services said.
Sniffer dogs are going through the wreckage as a precaution, sources said.
The church's priest, who was in the building but not the church, is OK.
The collapse did not damage the once-infamous Mamertine Prison, Prosperetti said.
This contradicted an earlier report from a fire-service official.
"Some fragments of the roof," fire service engineer Luigi Liolli said, "hit a part of the altar.
"A beam then damaged the Mamertine Prison too", where the pavement gave way, he said.
Colosseum Archeological Park Superintendent Alfonsina Russo told ANSA the church was the property of the Vatican's Vicariate of Rome.
She said the maintenance "is the competence of the Italian culture ministry, while the underlying Mamertine Prison is the competence of the Colosseum superintendecy".
The Mamertine Prison was used to house Rome's defeated enemies, many of whom were executed there.
Among those held there were Vercingetorix, leader of the Gauls during the Gallic War, who was executed at Caesar's Triumph in 46 BC; Jugurtha, King of Numidia, who died of starvation there in 104 BC; St Paul; and St. Peter, who was imprisoned there before being crucified, after performing baptisms in a spring at the bottom of the pit.