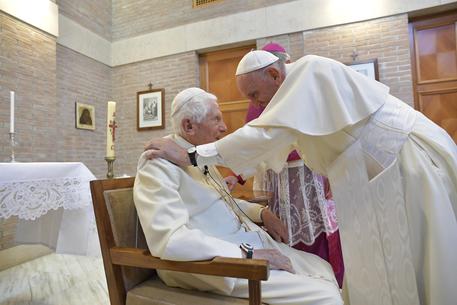 (ANSA) - Vatican City, August 30 - Benedict XVI's secretary Msgr Georg Gaenswein told ANSA Thursday that the ex pope has not confirmed the content of a letter from former US nuncio Carlo Maria Viganò saying Pope Francis covered up sex crimes by ex-Washington archbishop Theodore McCarrick and should resign.
Gaenswein confirmed to ANSA what he had already said, calling the report Benedict had backed Viganò "fake news, a lie".
He said the pope emeritus had not commented on the letter and would not do so in future either.
Pope Francis is "embittered" by a letter written by Viganò, the former top Vatican diplomat in the United States, which said Francis should step down for allegedly covering up a top US bishop's sex abuse, his close collaborators told ANSA Wednesday.
The former Vatican diplomat said in the document that Francis had protected McCarrick, who is accused of sexually abusing seminarians.
The pope is not considering resigning, however, the sources said. Viganò said he told Francis about McCarrick in 2013, saying he had been sanctioned by former pope Benedict XVI, but Francis did nothing about it.
Francis has said he will not dignify Viganò's allegations with a reply.
The case has pitted conservative critics of Francis against progressive supporters who say the traditionalists are "weaponising" child abuse to attack the pope's mercy-over-morals approach.
Viganò also claimed there was a powerful gay lobby in the Church he blamed for the many scandals on abuse and cover-ups, naming names.
On Wednesday Viganò, who was previously involved in the Vatileaks case, said in an interview that he was not pursuing a vendetta for having been replaced as nuncio to the US in 2016, or previously losing his place in the Vatican government.
"I have never had feelings of revenge or rancour in all these years," he said.
He denied being a "poison-pen letter writer", saying "I am accustomed to doing things in the light of day." Viganò, one of the conservatives who have criticised Francis for opening up to gays and remarried divorcés while denouncing 'clericalism', unfettered capitalism and climate change, was speaking to journalist Aldo Maria Valli who published the interview on his blog on Vatican affairs.