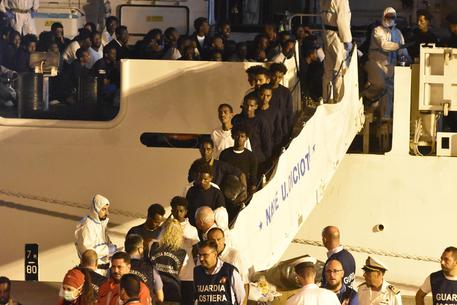 (ANSA) - Rome, August 30 - France has pushed back more than 40,00 migrants to Italy since last year so French President Emmanuel Macron should stop lecturing Italy about stopping migrants, Interior Minister Matteo Salvini said Thursday.
"More than 40,000 push backs at French borders with Italy since last year, a far cry from solidarity and reception," he said.
"Macron should have the good taste to keep quiet and not give lectures to the Italians".
Salvini has been refusing landing permission in Italy to many migrant rescue ships, drawing criticism from Macron.
Salvini also said Thursday he claimed responsibility for "blackmailing" the EU over the Diciotti coast guard ship carrying 177 Eritrean migrants.
"I learn there is a new crime, blackmailing the European Union, I didn't know it existed," Salvini told a press conference on the probe into the Diciotti where he is accused of illegal arrest and abuse of office, among other things.
"They are changing the penal code for the interior minister.
Good, I claim responsibility for blackmailing the European Union".
The EU refused to take in the migrants, who were eventually taken in by Italian bishops, Ireland and Albania.
Salvini added that Italy was "assessing" whether to continue the EU's Sophia mission which currently lands all rescued migrants in Italian ports.
Salvini also said he had been the one who had phoned the Italian Bishops' Conference (CEI) asking them to take migrants from the Diciotti coast guard ship where he had been holding them and demanding the EU take them.
"It was me who called the CEI, they didn't call themselves.
Ireland, Albania and the bishops were contacted by us," he said, referring to the two countries who also took in some of the Eritreans.
"Europe for the umpteenth time turned away and pretended nothing was happening," he said.
He said the government had also contacted "other countries we hope may be useful for other, eventual landings".
Defence Minister Elisabetta Trenta, meanwhile, voiced disappointment Thursday at drawing a blank on Italy's proposal to change the Sophia mission's landing rules so that other countries besides Italy can take migrants.
"I feel disappointed because I've seen that Europe is not here but I'm confident", she said after a defence ministers' meeting.
"We will assess what to do" after no agreement was reached on changing Sophia's port of landing rules.
"All decisions will be taken with the government snd Premier (Giuseppe) Conte", she said when asked whether Italy would leave the mission.
Trenta voiced the hope that things might change at an EU foreign ministers' meeting Friday.
"I've found open doors, but also closed ones," she said.