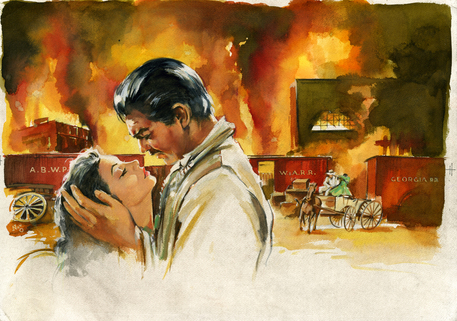 (ANSA) - Florence, August 29 - Hollywood poster designer and painter Silvano Campeggi, one of the most important graphic artists in the history of American cinema, has died at the age of 95, his family said Wednesday.
Campeggi designed the posters for Gone With The Wind, Casablanca, Singing In The Rain, An American In Paris, West Side Story, Cat On A Hot Tin Roof and Breakfast At Tiffany's among others.
Nicknamed "Nano", Campeggi's iconic images are associated with the golden era of Hollywood.
"He brought lustre to the name of Florence all over the world," said Florence Mayor Dario Nardella.
Campeggi's first career breakthrough came with a World War II commission from the American Red Cross to paint the portraits of American soldiers before they returned home, according to his Wikipedia entry. This deepened his understanding of American music, film and culture. After the war he moved to Rome, where he was approached by Metro-Goldwyn-Mayer for whom he produced the poster for Gone with the Wind, with Clark Gable holding Vivien Leigh in passionate embrace while Atlanta burned in the background.
In the following decades, Campeggi designed and produced the poster and advertising graphics for over 3000 films, working not only under contract with the MGM studios, but also with Warner Brothers, Paramount, Universal, Columbia Pictures, United Artists, RKO, Twentieth-Century Fox and several others. Sixty-four of the films he illustrated won Oscars, including Casablanca, Ben-Hur, Singin' in the Rain, An American in Paris, West Side Story, Exodus, Breakfast at Tiffany's, and Gigi.
Many of his images of Hollywood actresses are instantly recognizable: Liza Minnelli in derby hat and black stockings, Elizabeth Taylor, Lauren Bacall in beret and cape, Ava Gardner, Rita Hayworth, Sophia Loren. Equally, he portrayed the male stars: Marlon Brando astride his motorcycle as "The Wild One", a bare-chested James Dean, John Wayne in neckerchief and cowboy hat, Humphrey Bogart in his white dinner jacket.
Many of Campeggi's subjects became close personal friends. Ava Gardner asked him to accompany her down the red carpet at one of her movie premieres. His wife recounted a story of Elizabeth Taylor lending her maternity clothes after having just given birth herself. He described Marilyn Monroe, whom he first painted in the early 1950s, as "my icon and surely the most enchanting woman I have ever met." In the 1970s when film poster illustration lost impact in the face of television and newspaper advertising, Campeggi returned to Florence. There he painted a series of 50 images depicting Siena's Palio horse race (2001).