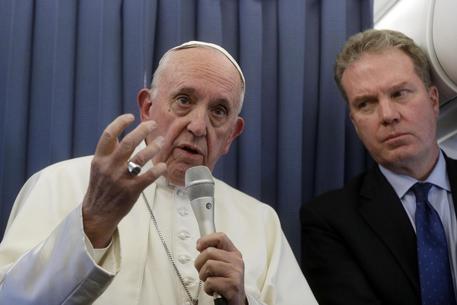 (ANSA) - Rome, August 27 - Italy's Gay Center said Monday Pope Francis was wrong to say gay kids could be helped by psychiatry.
"We're not ill," said the group's spokesman Fabrizio Marrazzo.
On his flight back from Ireland Sunday evening, the pope recommended parents seek psychiatric help for children who show homosexual tendencies.
A journalist asked Francis what he would say to parents who observe homosexual traits in their children.
"I would say first of all pray, not to condemn, to dialogue, to understand, to give space to the son or the daughter," he responded.
Parents must also consider the age of their child, he said.
"When it shows itself from childhood, there is a lot that can be done through psychiatry, to see how things are. It is something else if it shows itself after 20 years." He emphasised that parents should not respond with "silence".
"Ignoring a son or daughter who has homosexual tendencies is an error of fatherhood or motherhood."