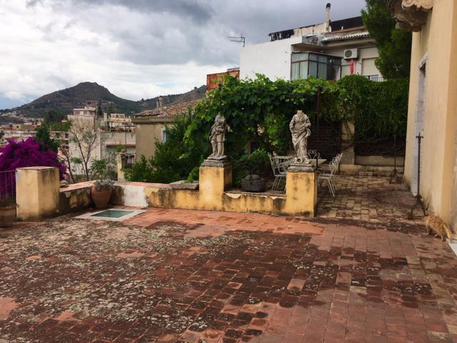 (by Mauretta Capuano).
(ANSA) - Rome, August 6 - Casa Cuseni is a house in Taormina rich in history and secrets, including frescoes of a homosexual love story it hid for over a century.
Greta Garbo, Coco Chanel, Pablo Picasso, Bertrand Russell and Roald Dahl all stayed at the home built in 1905 by British painter Robert Hawthorn Kitson, the son of a very rich industrialist in Leeds.
The home, which was built on a project also overseen by Sir Alfred East, president of the Royal Society, and Sir Frank Brangwyn, who studied under William Morris, is named after the local hill town and it is part of 'Taormina Cult', a tour organized aboard an Ape Calessino motorcar that also includes Villa Mon Repos at the Teatro Antico.
The tour is the brainchild of Antonella Ferrara, president of Taobuk, and Alfio Bonaccorso.
One of the house's best-hidden secrets is the dining room, which remained closed for 100 years and was only re-opened in 2012.
On its walls is painted the story of a homosexual love-story and their son, the first depicted adoption by two men in the local history of art.
The wall paintings were made by Brangwyn, who became famous for being the first decorator of the Louis Confort Tiffany and the Royal Gallery of the House of Lords, in Westminster as well as the Foyer of the Rockfeller Center Museum in New York.
His work at Casa Cuseni has remained intact despite two world wars.
During WWII, the house was occupied by the Germans but local villagers mobilized to hide the house's art collection (including 600 paintings), ultimately saving it.
In Art Nouveau style, the frescoes of the hidden room portray the love story between Robert Kitson and his partner in life, painter Carlo Siligato, who in 1908, when Messina was destroyed by an earthquake, adopted a child, Francesco.
Their family was illegal at the time.
Indeed Pablo Picasso, who visited Casa Cuseni in 1917, saw the room and kept it a secret, protecting his friends who would have otherwise ended up in jail.
The room is the only interior in the world entirely painted by Brangwyn and includes a wooden bicycle made by Futurist artists in Messina for Francesco and a napkin ring with the interwoven CC of Casa Cuseni which allegedly inspired Coco Chanel to design the logo of her eponymous fashion house.
Bertrand Russel learned he had won a Nobel Prize in 1950 while staying at the residence while Greta Garbo lived there for a year.
Roald Dahl is said to have conceived his book Charlie and the Chocolate Factory while staying at Casa Cuseni.
The house's current owners are Domenica (Mimma) Cundari, who grew up there, and her husband, Francresco Spadaro, a doctor.
The couple are in charge of Casa Cuseni's Fundation.
The home was declared a national Italian monument in 1998, an official museum of the City of Taormina in 2015 and a great Italian garden in 2016.
It was Daphne Phelps, Kitson's niece, who studied with Anna Freud and was a friend of Albert Einstein, who devoted the greater part of her life to the preservation and maintenance of the house, which she inherited from her uncle in 1948.
She turned the villa into a hotel for artists and researchers in 1948, to preserve it, and wrote a book 'Una casa in Sicilia' (A house in Sicilt), published by Neri Pozza.
She died in 2005 at the age of 94.
Cundari, whose parents worked for Phelps and who remembers when Dahl read out his stories to her when she was a child, bought it in 2011.