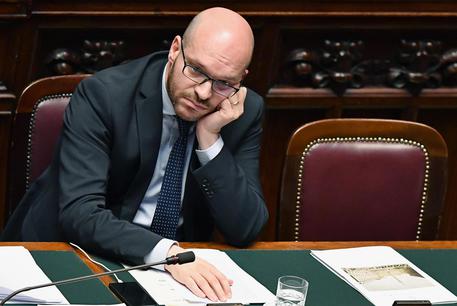 (ANSA) - Rome, August 3 - Family Minister Lorenzo Fontana on Friday called for the abolition of the 1993 anti-fascist Mancino law, sparking a furore.
"Let's abolish the Mancino law, which in these strange last few years has been turned into a legislative tool used by globalists to dress up their anti-Italian racism as anti-fascism," Fontana said on Facebook.
The Mancino Law, named after then-Interior Minister Nicola Mancino, whose signature it bears, permits the prosecution of individuals for "incitement to violence," for a broad range of hate crimes that includes the use of symbols of hate.
Rome's Jewish community came out against the idea. In a statement Ruth Dureghello, the president of the community, said the Mancino law was a "necessary instrument to fight the regurgitations of Fascism and anti-Semitism".
"If one accepts the position of minister of the republic of this country, one has to do so with awareness of history and of responsibility, avoiding quips and stupid provocations.
"Eighty years after the (Fascist) Racial Laws, it would be good to combat discrimination instead of continuously winking at Neofascism". The opposition centre-left Democratic Party (PD) said the proposal showed the far-right leanings of the League-5-Star Movement government.
"(They have proposed scrapping the law) because fascists and racists like this," PD President Matteo Orfini said.
"Because racists and fascists are evidently part of this government". PD Senator Edoardo Patriarca said that party was ready to defend the Mancino "with its teeth".
Roberto Speranza, a lawmaker for the leftwing LeU group, called on Fontana to resign.
Fontana, a member of the rightwing League party, also dismissed assertions by the PD that Italy is in enduring a racism emergency stoked by the government's tough talk on migrants following a series of apparently xenophobic attacks.
Two more took place overnight.
A Senegalese street trader was shot in the leg by two strangers in Naples. The 22-year-old victim has a regular residence permit. The shooting took place in the Vasto quarter of Naples, near the central train station.
Another migrant was shot at in an allegedly racist attack in the Tuscan city of Pistoia late on Thursday, according to the priest at the parish that is hosting the victim. "Two young Italians shouted 'shitty blacks' and fired one or two shots at one of our migrant lads, who was unhurt," Don Massimo Biancalani, the priest of the parish of Vicofaro, said via Facebook.