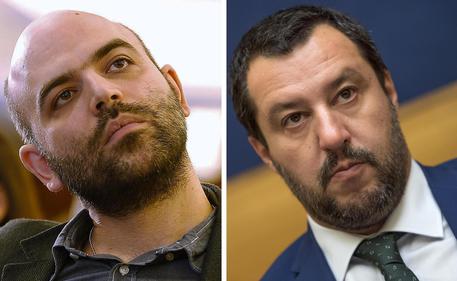 (ANSA) - Rome, July 26 - Roberto Saviano has been put under investigation by Rome prosecutors after Interior Minister Matteo Salvini last week filed a complaint against the anti-mafia writer for alleged defamation, sources said Thursday.
The move was described as a "obligatory act" following the minister's petition. Saviano accused Salvini of being the "minister of the underworld" after the League leader said the writer's security detail would be revised.
Saviano has been in round-the-clock police protection since his ground-breaking book Gomorra (Gomorrah) lifted the lid on the Neapolitan Camorra in 2006.
The book was adapted to a successful film adaptation and spawned a hit TV series.
Saviano is a highly vocal critic of Salvini, especially of his hard-line stance on migrants.
"It seems the minimum to me," Salvini said regarding the news Saviano was under investigation, adding he had no intention of withdrawing the complaint.
"Criticism is one thing, calling me a mafioso is another".