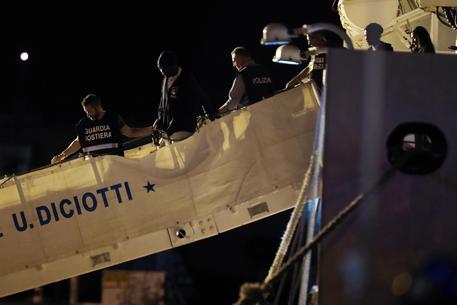 (ANSA) - Rome, July 13 - Interior Minister Matteo Salvini said Friday he would get to the bottom of the case of an alleged migrant "mutiny" on board a rescue ship.
President Sergio Mattarella "didn't interfere" when he instructed Premier Giuseppe Conte to offload a coast guard ship carrying 67 migrants at Trapani after Salvini blocked it because of the alleged incident on board the previous ship that first picked up the migrants, Salvini said.
The president "has never interfered with what I have done as interior ministers", said Salvini in reference to the Diciotti ship which had picked up the migrants from private Italian oilrig tug Vos Thalassa, where the alleged protest, allegedly led by a Ghanaian and a Senegalese man, allegedly took place.
The Vos Thalassa crew have reportedly said the crew was surrounded by the migrants and the first mate was pushed.
But the migrants have said they didn't attack anyone and were only afraid of being taken back to Libya, causing "confusion".
Judicial sources have said there may be arrests and one of the two alleged ringleaders of the protest may be a people trafficker.
Salvini went on: "I have nothing to clear up.
"If, however, Mattarella wants to understand what I did I'm at his disposal, but the fight against illegals is one of the country's priorities.
"The only thing that would make me angry is if all those who came off the Diciotti got off scot free, someone must pay.
"There must be certainty of punishment.
"I hope the prosecutors hurry up, it can't end up in sweetness and light".
Salvini had earlier said he would "go on to the end" to "get to the bottom" of what happened among the migrants.
He said "I will go to the end until someone is handed over to justice.
"I'm interior minister and I will do my utmost to defend the security of Italians, what I am doing is blocking departures, landings and deaths".
Salvini's coalition partner Luigi Di Maio said "Mattarella's decision must be respected".
The deputy premier and labour and industry minister said: "I believe that if the president intervened we must respect his decisions".
Salvini is also a deputy premier and leader of the anti-migrant League party.
He has been cracking down on migrants and has stopped NGO ships from docking in Italian ports.
Di Maio is the leader of the anti-establishment 5-Star Movement (M5S).
Magistrates union ANM on Friday called for an end to "interference" in the work of Trapani prosecutors investigating the two migrants that landed from the Diciotti coast guard ship Thursday night.
"The work of the Trapani prosecutors must be allowed to proceed without interference," the ANM said, referring to the pressure from Salvini.
The union said all calls for intervention were "unjustified and not in line with the principles of autonomy and independence laid down by the Constitution, to which everyone must keep".
Justice Minister Alfonso Bonafede said that "magistrates work in full independence and autonomy with respect to political power".
He said "I want to reassure everyone.
"Salvini expressed his opinion, he meant to say that if someone did wrong they must pay, but the facts speak clearly and they are showing this with the Diciotti case".
The crew of the Vos Thalassa oil-rig tug felt "seriously threatened" by the reaction of migrants when they were told they being taken back to Libya, sources at the Trapani prosecutor's office said Friday. The captain reportedly told prosecutors the migrants had surrounded the crew shouting "no Libya, Libya, yes Italy".
As well as surrounding the crew, they allegedly pushed the first mate, sources said.
This was when the captain decided to get in touch with the Rome port commander's office, which sent coast guard vessel Diciotti to offload the migrants.
The first questioning of the 67 migrants will take place today, sources said.
Some of the migrants told a UNICEF official Friday that they were afraid of being returned to Libya but did not attack anyone on board the Vos Thalassa oilrig tug that had picked them up, contrary to reports.
"We didn't attack anyone, there was 5-10 minutes of great confusion and fear, but we didn't want to hurt anyone," they told Italo-Egyptian UNICEF/Intersos officer Sahar Ibrahim on board the coast guard ship that took them on, the Diciotti.
"We were terrified, we didn't want to go back to Libya: we were ready to dive into the sea and risk our lives rather than being returned to land".