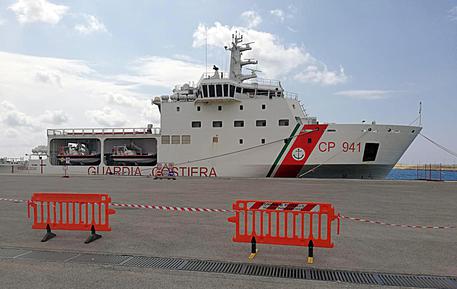 (ANSA) - Palermo, July 11 - The Italian Coast Guard's Diciotti ship carrying 67 rescued asylum seekers will arrive in Trapani on Wednesday, well-informed sources have said.
The migrants were rescued off Libya by a private Italian vessel, the Vos Thalassa, and then transferred to the coast guard ship in a case that has caused tension within the government.
The asylum seekers were transferred because the safety of the crew of the Vos Thalassa endangered by the conduct of some migrants, Transport Minister Danilo Toninelli said.
Interior Minister and Deputy Premier Matteo Salvini is unhappy that Italian vessels got involved in the rescue, anticipating an intervention by the Libyan Coast Guard. Salvini met Premier Giuseppe Conte on Wednesday and afterwards he said he had reached a "common line" with the head of government. But he also warned that: "I won't authorise the disembarkment until I have guarantees that the delinquents who hijacked a ship with violence will spend some time in jail and then be taken back to their own countries". League leader Salvini has spearheaded the hardline stance on migrants of the new coalition government that has seen NGO-run migrant rescue ships denied access to Italian ports.