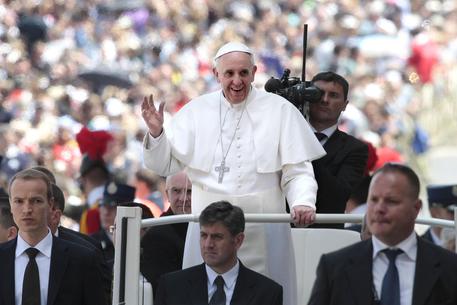 (ANSA) - Vatican City, July 6 - Pope Francis Friday said "God promises relief and liberation to the oppressed of the world but needs us to make his promise effective".
He presided over a Mass for migrants in St Peter's Basilica marking the fifth anniversary of his landmark visit to Lampedusa, the Italian island that has been the primary destination of migrants trying to reach Europe from North Africa for years. God, the pontiff said, "needs our eyes to see the needs of brothers and sisters... He needs our hands to rescue.
"He needs our voice to denounce the injustices committed amid the, sometimes complicit, silence of many".
There is "sterile hypocrisy in those who don't want to 'dirty their hands"', the pope also said during his homily.
"It is a temptation that is also present in our day, which translates into closure towards those who have a right, like us, to security and a dignified living condition and who build walls, real or imaginary, instead of bridges".
"Confronted with today's migration challenges, the only sensible answer is that of solidarity and mercy".
The migrant issue needs "a response that doesn't make too many calculations but requires an equal division of responsibility, an honest and sincere evaluation of alternatives and prudent management".
The pontiff thanked those who carry out rescue operations in the Mediterranean Sea, including officials who attended the Mass Friday, including from Spain, for "simply deciding to take responsibility" and saving lives.
He expressed solidarity and encouragement to migrants "because I understand well the tragedies from which they are fleeing.
"I ask you to continue to be witnesses of hope in a world that is increasingly concerned with its present, with very little vision for the future and a reluctance to share", the pontiff told migrants.
He also asked them to "respect the culture and laws of the host country" and to jointly implement "an integration process".
He concluded the homily with a call to "overcome fears and concerns".