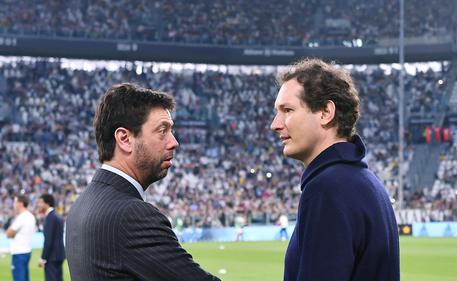 (ANSA) - Turin, July 5 - The Calabria-based 'Ndrangheta mafia has been involved with ticket touting at Juventus for 10 years, prosecutor Marcello Tatangelo told a trial into Mob infiltration in northwest Italy on Thursday, referring to ties between mafia bosses and Bianconeri ultra leaders.
On December 18 Juventus Chairman Andrea Agnelli's one-year ban for ultra ticketing ties was cut by an Italian Soccer Federation (FIGC) Federal Court so that it elapsed on that day.
A 100,000-euro fine was imposed by the court.
As well as the sanctions on Agnelli, the federal court gave Juve a 600,000-euro fine.
It also ordered a Juve curva end stand closed for the first home game of 2018, against Genoa on January 21.
The one-year ban was imposed on September 25 when a lower FIGC court banned Agnelli for one year for improper contacts with ultra fans including a suspected member of the 'Ndrangheta over ticketing and ticket touting.
Agnelli, 41, was found guilty of "endorsing, or in any case not preventing" illicit relations to keep hardcore fans happy by giving them tickets.
Juve stressed that the tribunal's sentence had "ruled out all hypothesis of a link with members of organised crime".
Agnelli, who was recently elected president of the European Club Association, has said he only met the allegedly Mob-linked ultra at meetings with groups of other supporters.
The fan in question, alleged 'Ndrangheta member Rocco Dominello, has been convicted of ticket touting.
The FIGC tribunal said Agnelli had "sporadic" meetings with Dominello and was not aware of his criminal background.
In the trial into suspected 'Ndrangheta penetration of the Piedmont economy, prosecutors have asked a sentence of eight years for him, and 12 years for his father Saverio.
The longest term, 17 years one month and 16 days, was asked for Diego Raso, a member of the so-called Santhia' branch of the Calabrian Mob.
Total terms of 112 years have been requested in the 'North Piedmont' trial.