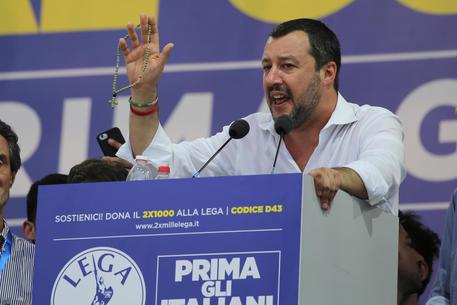 (ANSA) - Pontida, July 2 - League leader Matteo Salvini said Sunday the anti-migrant Euroskeptic party would rule Italy for 30 years and would launch a transnational League of Leagues to fight European elites in next year's European Parliament elections.
"We will govern for the next 30 years," Salvini told the faithful at their annual gathering at their spiritual birthplace of Pontida in northern Italy.
The League of Leagues, he said, would "bring together all the free and sovereign movements" ahead of next year's EP elections.
That vote will be a "referendum between the people and the elite", the rightwing populist leader said.
Salvini added that the League's government partner, the anti-establishment 5-Star Movement (M5S), was "honest and consistent".