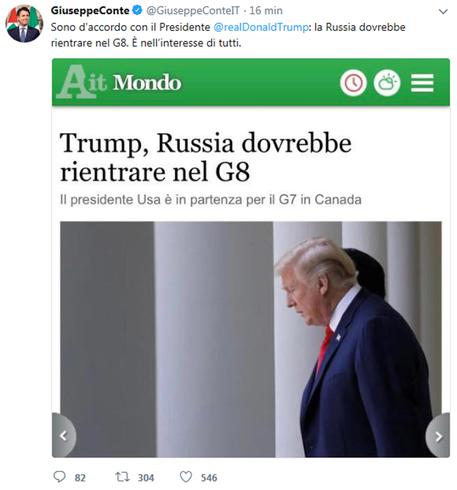 (ANSA) - Charlevoix, June 8 - Italian Premier Giuseppe Conte said Friday that he wants to see Russia back in the group of the world's most industrialised countries. "I agree with (United States) President (Donald) Trump: Russia should return to the G8," Conte tweeted from the G7 summit in Charlevoix, Canada.
"It's in everyone's interests". Conte said Italy would "weigh stances" on possibly vetoing sanctions on Russia at the G7 in Canada. "We will weigh the positions, we still have to start the G7," he replied to a question on whether Italy would veto Russia sanctions. "We are open to dialogue, but that does not mean transforming a defined process, linked to the implementation of the Minsk accords", he said.
"We are comfortably placed in NATO: Italy's international position is absolutely not in question but we are certainly in favour of dialogue and we are very attentive that sanctions should not impact on Russian civil society".
Conte voiced "total dissatisfaction" on the reform of the Dublin rule on migrants. Speaking at the G7 in Canada, Conte said "there is total dissatisfaction on Italy's part on the proposals currently being discussed, Italy cannot be left on its own in managing migratory flows". Speaking after meeting European Commission chief Jean-Claude Juncker and European Council President Donald Tusk, Conte said "we want a stronger Europe but also one with more solidarity".
Juncker said he had a "good" bilateral meeting with Conte and Italy was "crucial" for the EU. "We didn't speak about Russia in particular" but Italy "has a fundamental role in Europe," and Italy "needs Europe and Europe is not complete without Italy," he said. Juncker was answering a question about Italy's bid to get sanctions on Russia lifted. "I had good talks with Conte and I'll see him again before the summit, we'll talk about immigration and the EU budget", Juncker said.
Tusk said in answering a question on Conte's support for the Trump stance that European Union countries will have the same line on Russia, "maybe not in the details but in the general line,". "There are no disagreements between Italy and Europe," he said, adding that he had had "good, friendly" bilateral talks with Conte. The Group of Seven format must remain unchanged for now, Juncker and Tusk agreed at the summit. Speaking after US President Donald Trump said he favoured Russia's return to a G8, receiving Italian Premier Giuseppe Conte's endorsement, Juncker said "we must safeguard EU principles, among which, European states, like Russia, must respect international rules". Juncker said "of course, we must reopen dialogue with Russia, but in other ways".