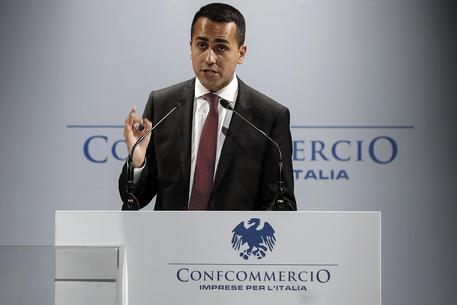 (ANSA) - Rome, June 7 - Labour and Industry Minister Luigi Di Maio told retailers on Thursday that the new government will dismantle parts of the current system that seeks to uncover tax evasion. "We'll abolish all the instruments like the spending-metre and the income-metre and we'll bring in a reversal of the burden of proof," Di Maio, who is also deputy premier and 5-Star Movement leader, told the assembly of retailers association Confcommercio. "You are all honest and it is the duty of the State to prove otherwise".
He said instruments like the 'spending-metre' had "made slaves of those who produce value".
Di Maio said tax evasion would be tracked down by the cross-checking of data in the possession of the civil service. He said the new government would not be reckless with the public finances but stressed that it would not be afraid to have differences of opinion with the European Commission.
"The solidity of the accounts is dear to us," Di Maio said.
"If you love Italy, and we love Italy, if we want to carry out economic projects, you have to negotiate with Europe about the conditions that Italy cannot sustain, including by saying no". He said the government will bring in a minium wage for all workers who are not employed on contracts regulated by national collective-bargaining systems. "Our recipe to enable the companies that create jobs to have lift-off is to leave them in peace," he added.
"First of all we have to lighten up the laws, because there are too many".