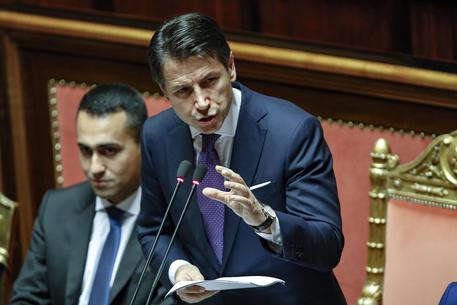 (ANSA) - Rome, June 5 - Premier Giuseppe Conte addressed the Senate on Tuesday to ask it to put its confidence in the 5-Star Movement/League coalition government he heads, outlining policies that include a hard line on migrants and a drive to have Western sanctions on Russia revised. "Today we present ourselves to you to ask for confidence, not just in a government team, but also in a project to change Italy, formalised in the form of a contract between the two political parties that form the parliamentary majority," Conte said. Conte said that his government was not ashamed to be described as populist. "The political parties that make up the government majority have been accused of being populist and anti-system," Conte said. "If populism is the attitude of listening to people's needs, then we lay a claim to it".
Conte told the Senate on Tuesday that his 5-Star Movement/League government will put an end to profiteering from the plight of migrants and strengthen the rights of victims of crime who defend themselves.
"Change is (in the form of) fast, efficient justice and new instruments for citizens for class action suits, fair compensation for the victims of violent crime and the strengthening of legitimate defence," Conte said.
"Change that will put an end to the business of immigration, which has grown disproportionately under the cloak of fake solidarity".
Conte said his government wants to help Western relations with Moscow change. "We intend to reiterate our country's convinced (sense of) belonging to the Atlantic Alliance, with the United States a special ally," he said.
"We'll be the advocates of an opening towards Russia, which has consolidated its international role in various geopolitical crises in recent years.
"We'll be promoters of a revision of the system of sanctions, starting with those that risk crucifying Russian civilian society". The executive's faces a confidence vote later in the day in the Upper House and another confidence vote in the Lower House on Wednesday.