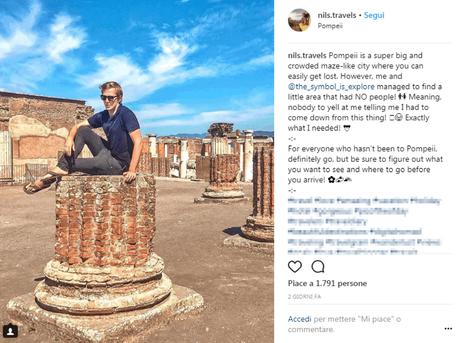 (ANSA) - Naples, June 4 - A young French tourist has taken a photo on the base of one of the columns of the Basilica in the Pompeii archaeological site and posted it on social networks, setting off a rash of criticism and scorn, especially among tour guides and those working in the field. Vincenzo Marasco from the Centro Studi Storici Nicolò D'Alagno reported the photo to those working at the archaeological site.
Marasco has also set up a social network site that local history scholars living in the Vesuvius area have signed up to. "Never lower your guard against imbecility" he wrote in a post that includes the photo of the young French tourist. "Our cultural heritage should be preserved in an unconditioned manner and those directly tasked with doing so should be helped, when necessary, by the many volunteers and scholars who devote their time to the most important and precious things that Italian history has left to us. Let's work together against those deface and do not care about the value of our monuments!!".
The "too relaxed" behavior of the French tourist in the spectacular Roman city of some 2,000 years ago is not an isolated case. Take a look at social networks and you will find many similar examples." The French tourist's photo was reminiscent of another incident at another site in which there was the same distinct tactlessness. That time, however, it was a group of young girls who took of photo of themselves on the throne at the Naples' royal palace. This photo also went viral online in May and showed four participants of a festival that was being held at the monument.
The girls were wearing 12-inch heels on ancient rugs, well beyond the protective cordons. The selfie sparked debate on an age-old issue: that of whether monuments of great historical value should be open for social events. But it is Pompeii - where several extraordinary discoveries have been made recently - that is leading the "rankings" in inappropriate behavior by visitors. Many visitors have reached out and touched or picked up things there that they shouldn't, unable to resist the beauty of this city that remained almost entirely intact thanks to the ash of the 79 AD eruption of Vesuvius. The latest case was on May 11, when a 52-year-old French visitor was found with 13 fragments of terracotta taken from the excavation site in his bag during a check. The security guards saw him near the "Casa Loreto Tiburtino" and stopped him.
He was later arrested by the Carabinieri, along with a 50-year-old woman, on theft charges. The woman had also taken a "souvenir": a 17 cm x 7 cm fragment of Roman-era marble that she had hidden in her bag.