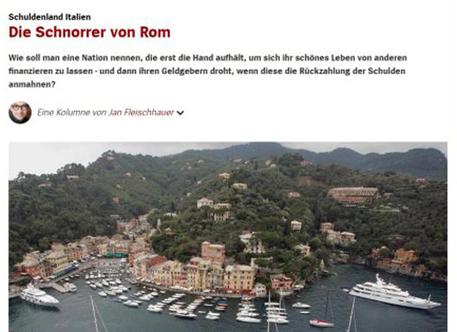 (ANSA) - Berlin, June 1 - The German daily Der Spiegel has told ANSA in an interview that views expressed by one of its columnists on the situation in Italy was only one of several different, contrasting positions within the publication.
President Sergio Mattarella called comments made in the column by Jan Fleischhauer - on "Rome scroungers" - "unacceptable and grotesque". Online editor Barbara Hans said Fleischhauer's column was provocatory and conservative as a rule and that his opinion was one of several, but that it should not be understood to represent the position of the publication as a whole. She added that the newspaper cultivates pluralism and that this is seen in other parts of the newspaper dealing with debt reduction in Italy. When asked whether there are articles that are seen as problematic for the paper due to the general judgments they contain - for example, on Italy - Hans said that Der Spiegel has no influence on the very emotional reaction to some of the articles published. She added that it would be against their editorial line not to publish something simply because someone (a government, company or politician) felt under attack by it, stressing the value of press freedom.
The Der Spiegel online editor said that though it would be better if European populations understood each other better, this was the duty of politicians and not the media.