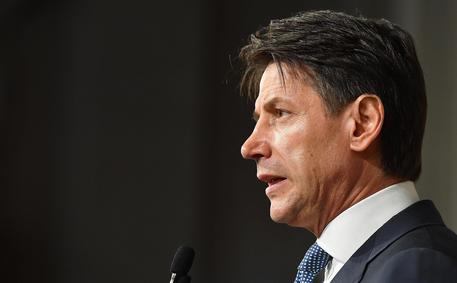 (ANSA) - Rome, May 23 - Premier-designate Giuseppe Conte, a law professor, said Wednesday he would be the defence lawyer of Italians and lead a government of change.
Speaking after getting a government-formation mandate from President Sergio Matteralla for a M5S-League executive, Conte said that he would be the "defence attorney" for the Italian people. He said "I am a professor and lawyer, I have defended cases of various people and now I defend the interests of Italians in all EU and international fora, dialoguing with EU institutions and with the other countries, I propose to be the defence attorney of the Italian people". Conte said that a government of change was set to be born. He said Conte said "the (government) contract underlying this experience fully represents the expectations of change of the Italians. "I will put it at the foundation of the government experience in full respect for the prerogatives of the president of the Republic and the Constitution. "I want to give life to a government on the side of citizens".
Conte said that "the president of the Republic conferred on me the mandate that I accepted with reservations. If I succeed in bringing to completion the mandate I will illustrate to (parliament) a programme based on the agreements between the majority political forces".
Conte said that "with the president of the Republic we spoke about the demanding and delicate phase and the challenges awaiting us of which I am aware as I am aware of confirming the international and European placement of Italy".
He said that he could not wait to start to govern Italy. Conte said "I am prepared to be premier without sparing myself, with the utmost commitment and utmost responsibility". He said "I can't wait to start working seriously, thank you to you all".
Conte said that he expected to be able to drop his formal reservations about his mandate, meaning he felt sure about getting a confidence vote in parliament, "in the next few days".
President Mattarella handed the law professor the mandate after nearly two hours' of talks to try to form a government backed by the two forces who proposed him, the anti-establishment 5-Star Movement (M5S) and the anti-migrant, Euroskeptic League parties.
Conte, an unelected 54-year-old Puglia-born lawyer and academic picked by the two populist parties, will assemble a team of ministers he will then propose for Mattarella's approval.
The M5S and League have already agreed their government team and a government 'contract' including a basic income, flat tax, pension reform, and vows to renegotiate EU spending limits, expel half a million undocumented migrants, revise the TAV high-speed rail line with France, lift compulsory school vaccinations, scrap hundreds of 'useless' laws, and strike a new partnership with Russia.
Mattarella is expected to have something to say about some touted ministerial picks, especially anti-EU economist Paolo Savona as economy minister. He may also challenge some aspects of the programme if they clash with the Italian Constitution and international treaties.
Conte, who would be Italy's sixth unelected premier, was chided Tuesday on some allegedly misstated parts of his CV and his past representation of the poster girl for the discredited Stamina stem-cell treatment.
M5S leader Luigi Di Maio said that "today the third republic has started" after President Sergio Mattarella summoned Conte. "I had said so, I had promised," he continued. "Obviously, the president decides, but if he has been summoned...".
The 'first republic' refers to Italy's post-war political establishment that was brought down by the Tangentopoli corruption scandal in the early 1990s.
The second republic refers to the political set-up that followed.
League leader Matteo Salvini said there should be no veto on 82-year-old Euroskeptic economist and former minister Paolo Savona as economy minister in the new government. Asked about a rumoured rejection of Savona by President Mattarella, Salvini said "I don't think there are vetoes from anyone. "If it is a fault to have said that certain EU choices are against the national interest, that is a merit". Salvini said "let's wait and see but what concerns me is that there can't be vetoes on people who put the interests of the Italians at the centre".