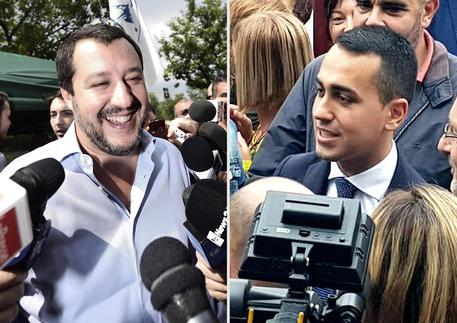 (ANSA) - Rome, May 21 - Anti-establishment 5-Star Movement (M5S) leader Luigi Di Maio and anti-migrant Euroskeptic League leader Matteo Salvini said after government-formation consultations with President Sergio Mattarella Monday that 54-year-old law professor Giuseppe Conte would be the premier of a political government.
"We are proud of this choice, it will not vex Italians," Di Maio said.
He reiterated: "I am very proud of this name because it is the synthesis of the 5-Star Movement.
"He will not vex the Italian people.
"To those who criticise us in the EU I say first let us start and then criticiuse us," he said.
As for the fact that if approved by Mattarella he may be Italy's sixth unelected premier, Di Maio said "he was in my team, 11 million Italians voted for him".
Conte will now have to be approved by Mattarella, as will the government programme 'contract' with the League.
"Giuseppe Conte will be the political head of a political government, indicated by two political forces, with political figures inside it," Di Maio went on.
"And above all with the support of two political forces that have been voted for.
"No to changing parties, no to persons that come from the mixed group and join other groups. That was not the spirit we wanted to give to this government".
Di Maio said that "I think that today we can say that we are faced with a historic moment. "We indicated the name of the premier to the president of the Republic who can carry forward the government contract" with the rightwing populist League.
"The issues of the Italians come before all else," said Di Maio.
"I'm proud we brought into government our electoral programme, there are the Five Stars, there are our 20 points".
He said "in the government contract there are the 20 points indicated in the electoral campaign and many solutions to Italians' suffering, from the basic income to the Fornero law, to more budget space in Europe, from the fight against gambling, to the reform of the Good School reform, to healthcare, with meritocracy for those heading hospitals. "There are the great historic battles of the M5S, such as public water".
Di Maio said "we are fully satisfied about the work we hope in the next few days can start this new course for the Republic.
"They have been 80 days in which it has been worth taking time because finally the Third Republic has been born".
League leader Salvini said after the consultations with Mattarella that no one has anything to fear and the government with the M5S would grow the economy while respecting EU fiscal limits.
"We're ready to start and no one has anything to fear", said Salvini as the spread rose close to 190 on a Fitch sovereign-debt risk report.
"We gave the name (of Conte as premier candidate) to the president and we have a very clear idea of the team and the project for the country. "We are eager to start to grow the economy of the country".
He said that the government would place the national interest at the centre "respecting everyone and everything, respecting all the norms and limits, but growing the country". "We are ready, we've given (Mattarella) a clear name and team", Salvini reiterated.
Earlier European People's Party (EPP) leader Manfred Weber said the 5-Star Movement and the League, who look set to form a coalition government in Italy, are taking huge risks with the policies they are proposing. "You are playing with fire because Italy is heavily indebted," Weber was quoted as saying by German media about a future M5S-League government. He reportedly said that "irrational or populist actions could cause a new eurozone crisis" and made "an appeal to stay within the confines of reason".
The League immediately rejected Weber's contention and said he was the one playing with fire by continuing to try to assert alleged German hegemony. "The League-M5S government will act in the interests of the Italians, not that of the Germans!" said League EP Whip Mara Bizzotto.
"It's Weber who's playing with fire: the time when Italy took orders from Berlin is over".
Bizzotto said Weber "should mind his own bloody business, the Italians are tired of taking orders from Brussels and Berlin! "Let Weber put his mind at ease: the time when Merkel and her proconsuls in Brussels set up and knocked down Italian governments according to the interests of Germans and their banks is over".
League leader Salvini tweeted: "after the French, today is the turn of German threats: 'you're playing with fire because Italy is heavily indebted' says Manfred Weber, leader of the EPP...Let him think of Germany, and we'll think about the good of Italy!" The M5S) caucus at the EP) said "EPP leader Manfred Weber missed an opportunity to keep silent. "Those who don't respect democracy and want to trample the outcome of the March 4 elections are playing with fire by trying to impose the umpteenth technocratic government".
They said "the 5-Star Movement is a chance for change for a Europe which has disappointed citizens with failed austerity policies and a selfish management of immigration".