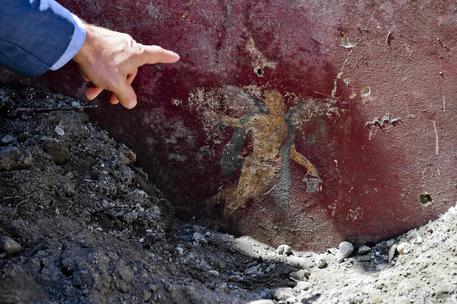 (ANSA) - Pompeii, May 17 - Archaeologists have uncovered a 'street of balconies' during excavations at a previously unexplored area of Pompeii.
Here parapets and floor tiles bear witness to four projecting balconies that withstood the devastating eruption of Vesuvius in 79 AD, which buried the ancient Roman city in a thick layer of volcanic rock and ash. Archaeologists have also found clay amphorae for wine still lying on their side after being placed in the sun to dry. "For Pompeii conservation of the upper storey is a rarity", director Massimo Osanna told ANSA. Consequently, the balconies will be restored and included in a new itinerary linking the Street of Nola with the Street of the Silver Wedding, he added. In addition to the balconies, the site has also delivered up frescoes, vases, oil lamps and other treasures on a daily basis.
Some 10 m from the balconied houses workmen have just finished freeing up the top part of a wall in what appears to be a pleasant middle-class residence, where a pink-skinned cupid wearing a sea-blue drape can be seen against a wine-red background. The figure carries a full bucket of water and its presence might suggest that there are other, more intricate decorations on the as-yet uncovered lower section of wall. On the other side of the street another residence with a square garden is coming to light that was having work done to it at the time of the eruption.
"It was in all likelihood renovation work after the devastating earthquake of 62 AD," Osanna said. An archaeobotanist who is working alongside the team of 40 diggers is studying the remains of the garden to establish what was grown there. She has poured plaster into the empty spaces left by the roots using the same technique that was employed to make the moving casts of the victims.
"The idea for now is that it was a vegetable garden surrounded by bushes and trees, possibly fruit trees," she said.
The new excavations over 1,400 sqm in the Regio V have the primary aim of shoring up 2.6 km of walls that are at risk of collapse, and work is expected to continue for months. And now archaeologists can count on new technologies that were not available even ten years ago. These include aerial drone photography, laser scanners and micro cameras that can be used to explore underground cavities.