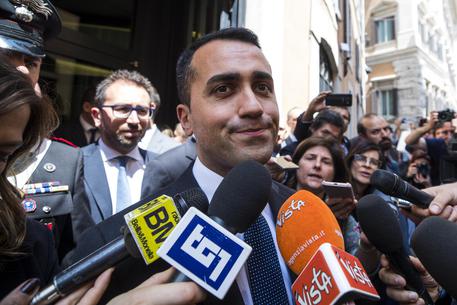 (ANSA) - Rome, May 11 - 5-Star Movement (M5S) leader Luigi Di Maio said that a fresh meeting with League chief Matteo Salvini on the formation of a new government went well on Friday. "We are finding other areas of agreement, the meeting was positive," Di Maio said. "We are making notable steps forward with the government programme, we are finding broad agreement on a basic income, flat tax, (scrapping) the (2011) Fornero (pension) law, the issue of fighting the business of immigration, and on conflict of interest".
Di Maio and Salvini are reportedly seeking to identify a "third premier" - a figure that is not one of the two - who could head the executive.
But the M5S head said that "we didn't talk about the name of the premier" on Friday.
"Let's hope we get a deal as soon as possible, because if we don't we'll go back to the polls," he added.
Di Maio also confirmed that an eventual deal would be put to an online vote of M5S members. He said the online vote would ensure that "a good contract" is forged. "I guarantee that we will do a good job to satisfy what Italians expect from a government of this scope," he said. He added that the leaders would meet again in Milan on Saturday as part of a drive to get to "the signing of a contract of a government of change".
The League and the M5S may present the name of this 'third premier' to President Sergio Mattarella on Sunday.
If this pans out, the president could give a mandate to form a government on Monday and the new cabinet could be sworn in by the end of next week. "There will be less than 20 (ministers)," said Vincenzo Spadafora, who has been put in charge of handling institutional relations by the M5S.