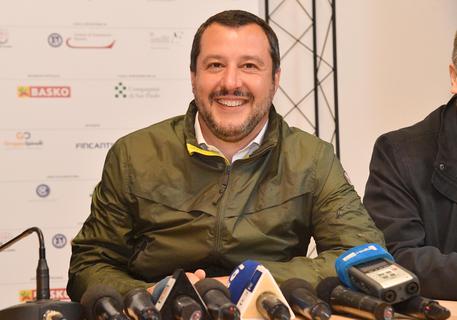 (ANSA) - Milan, May 4 - Anti-migrant Euroskeptic League leader Matteo Salvini on Friday called for a government between the centre right and the anti-establishment 5-Star Movement (M5S) until December and reiterated his opposition to a technocrat-led executive. "If it's a technocratic government, a 'purpose' one or an institutional one, the mandate must be given starting from those who won (the March 4 general election), and I rule out any Monti-style technocrat," he said. "And I reiterate the invitation to the M5S to make a limited-time government together to do a few things well".
As for who should head the executive, Salvini said he had "names in his head including people who are not from the League".
He said he would like to see a winner's bonus "for the list or coalition that comes first." Salvini said the caretaker government of Premier Paolo Gentiloni should not be extended, and "another government" was needed.
He said that media had touted premier names "to which I saw no: I will never back governments led by lady's companions of the European Commission".
Salvini called for an immediate electoral reform and a block on VAT hikes, and said the new EU budget should be rejected.
He said it was better to reject the EU budget than to hold a referendum on the euro as advocated by M5S founder Beppe Grillo.
The League leader added: "Never with the PD, never with Renzi".
Asked if his chief ally, Silvio Berlusconi of the centre-right Forza Italia (FI) party, agreed on a government with M5S support, Salvini said "why not?".
Ex-premier Berlusconi and the M5S have been scathing in their criticism of each other.
M5S leader Luigi Di Maio said he would only form a government with the League and not also with Berlusconi.