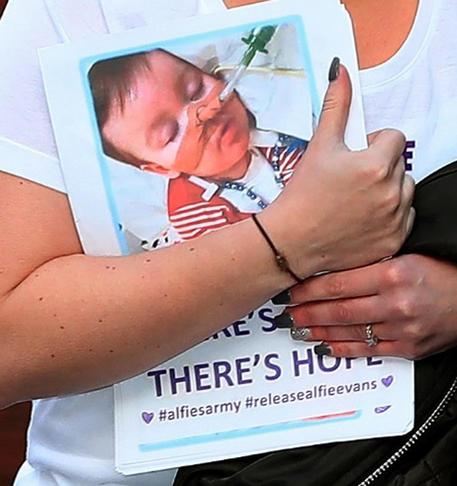 (ANSA) - Rome, April 23 - Italy on Monday gave Italian citizenship to terminally ill British toddler Alfie Evans so that he can hopefully be "immediately" moved to Italy from Liverpool, where doctors are set to pull the plug on him, the foreign ministry said. "Foreign Minister Angelino Alfano and Interior Minister Marco Minniti have granted citizenship to little Alfie," the ministry said.
"In this way the Italian government hopes that being an Italian citizen will enable the immediate transfer of the child to Italy".
It would be up to Alfie's parents to decide his fate if he were moved to Italy, deputy head of the national bioethics board (CNB), Maria Pia Garavaglia, told ANSA Monday. "In Italy, with the living will, we have an explicit law on end of life issues and, as far as minors are concerned, the holders of the right to choose are the parents," she said. "It is clear that with the acquisition of Italian citizenship Italian law will be applied, so it will be the parents that will decide," she said.
The procedures to pull the plug on Alfie were briefly suspended Monday afternoon.
Alfie's father Thomas said that he and his wife were waiting for Alfano to call British opposite number Boris Johnson. "Alfie has been granted Italian citizenship, we are waiting for the Italian foreign minister to call Boris Johnson," said Thomas Evans. "Alfie belongs to Italy". Alfano and Johnson are at the Group of Seven foreign ministers' meeting in Toronto Monday.
Mariella Enoc, head of the Vatican's Bambino Gesù Hospital in Rome, said she had gone Monday to the Liverpool hospitalin order to bring Pope Francis's "closeness" to his parents. Meanwhile pro-life demonstrators tried to get into the Alder Hey Hospital but were blocked by police, as tension mounted on Monday. Hundreds of supporters of the parents gathered outside the hospital. "I spoke to the parents, I brought them the closeness of Pope Francis, but also of the many parents who find themselves in their situation," Enoc told ANSA, stressing that she had not been received by hoppital management.
"The parents are not resigned, they are doing their utmost to slow the start of the procedure (of pulling the plug), but nothing more can be done," Enoc said.
Alfie's parents on Friday made a fresh appeal to the European Court of Human Rights after Britain's Supreme Court rejected a plea to prevent doctors pulling the plug on him.
But on Monday the ECHR rejected that appeal, finding in favour of the British judges. Last Monday Italian Foreign Minister Angelino Alfano urged his British counterpart, Boris Johnson, to allow Alfie, who is suffering from an undiagnosed degenerative disease, to be transferred to medical facilities in Rome.
Alfie's family is in a legal battle with Alder Hey, a children's hospital that says it is best to withdraw ventilation as his condition cannot be treated and has destroyed much of his brain.
The boy's parents want to take him to Rome's Bambino Gesu' children's hospital, which is owned by the Vatican.
Alfano asked for the parents' request to be granted to take the boy to the hospital in the Italian capital, "medical facilities of a very high level that accept him in on the base of an agreement".
He noted, however, that "Alfie is a British citizen and Italy respects the decisions made in the framework of British national jurisdiction" and that "the British national healthcare system and medical standards are among the highest in the world".
The Rome hospital has reportedly given the same prognosis but would be willing to perform a tracheotomy.