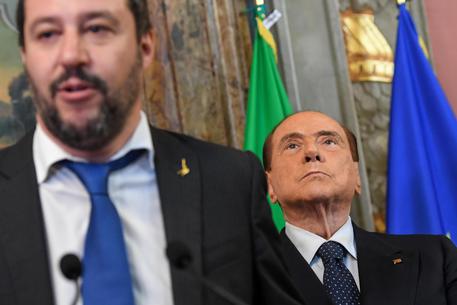 (ANSA) - Rome, April 19 - League leader Matteo Salvini said after government-formation consultations with Senate Speaker Maria Elisabetta Alberti Casellati Thursday that the centre right was seeing new developments from the anti-establishment 5-Star Movement (M5S), which has hitherto vetoes centre-right Forza Italia (FI) leader Silvio Berlusconi being part of an M5S-League government. "Yes, there are signs of novelty from the M5S, and we trust in what Di Maio will say to Casellati today", said Salvini.
M5S leader Luigi Di Maio will speak to the Senate Speaker starting at 17:30.
"Yesterday we came out of here with slaps to the face, and if today we're coming out with smiles half the work is done, we'll do the rest next week. Let's hope today is the good day: we trust that we can form a government between those who won the elections. If the vetoes fall, if the Nos fall, we can start to work.
"We nourish the well-founded hope that we will finally overcome the politics of No that many have carried forward until today", said Salvini, who leads the centre-right coalition after winning 17.5% of the vote in the March 4 general election, compared to FI's 14%.
The coalition as a whole got 37%.
Salvini said that "we trust that the second party (the M5S) will overcome its vetoes and finally agree to sit down to the table speaking of programmes and not posts", referring to M5S leader Di Maio's insistence on becoming premier after winning 32% of the vote and becoming Italy's biggest party.
Salvini said "today we can start", stressing that the M5S had agreed to "dialogue on programmes".
Salvini said that "for us a government with those who lost the general election (the centre-left Democratic Party) is unacceptable".
The PD slumped to its worst-ever showing, getting just 18& on March 4.
The M5S has made separate overtures to the League and to the PD and is drawing up common programme points with both.
The PD is sticking to ex-leader Matteo Renzi's call to stay in opposition.
Salvini also said Casallati's exploratory mandate was "the last call to responsibility" and reiterated "let's talk about issues and not posts".
The M5S had been expected to reiterate their Berlusconi veto and doom the Senate Speaker's bid to find a way out of the deadlock.