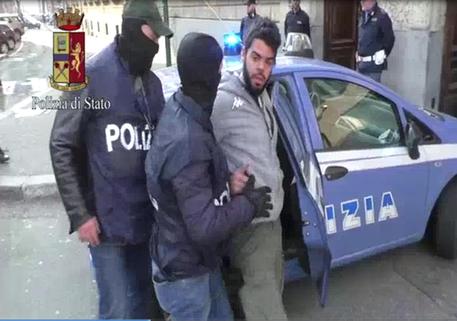 (ANSA) - Rome, March 28 - An Italo-Moroccan accused of belonging to the Islamic State (ISIS) Islamist terror group was arrested in Turin on Wednesday and police said he had been planning to use trucks for attacks and seeking 'lone wolves' to carry them out. Elmahdi Halili, 23, the author of the first ISIS propaganda message in Italian, was captured at the end of a probe by anti-terrorism police in the northwestern Italian city.
At the moment of his arrest, Halili reportedly shouted "Tyrants! I'm going to prison with my head held high".
Turin Police Chief Francesco Messina said "he is a very motivated individual, with no intention of repenting".
Messina said "we had to act immediately to eliminate this threat: Halili could have carried out attacks".
"He had moved from self-indoctrination to trying to contact others, 'lone wolves', who could carry out terrorist actions, and he was weighing how to use knives and how to prepare trucks for attacks," Messina said.
In some cases he met these lone wolves, Messina said, who were Italians converted to Islam, Ghanaians and Moroccans, often already known to police for other crimes.
Messina said "it was a threat in a fluid context, not precise but very delicate." He said "Daesh (ISIS) has been defeated on the field of battle but its propaganda continues".
The head of the DIGOS special security police in Turin, Carlo Ambra, who coordinated the operation, said "it was time to intervene.
"We couldn't afford to let him identify a target to strike.
"There was a need to act immediately".
Ambra said the operation was called 'Love and Hate' because "Halili said that Islam is a balance between these two feelings: love for believers and hate for unbelievers". Halili was already arrested in Brescia in 2015 and plea-bargained a term of two years for apology of terrorism, police said.
The probe, codenamed Balkan Connection, identified people able to enlist fighters for ISIS. These included the Brescian foreign fighter Anas El Abboubi who was arrested and then released by a parole court and went to fight in Syria.
He is believed to have died.
Police on Wednesday carried out searches across northern Italy - in Milan, Modena, Bergamo and Reggio Emilia - and also in Naples against individuals suspected of links to extremist Islamist circles, police said.
A number of Italians who have converted to Islam are also involved in the probe, as well as citizens of foreign origin, police said.
Charges against them include waging a campaign of radicalization and proselytism via the Interet, judicial sources said.
On Tuesday in Foggia an Italo-Egyptian was arrested on charges of teaching children to kill for jihad.
In an interview with La Stampa newspaper, caretaker INterior Minister Marco Minniti said "The picture of the ISIS threat remains unchanged.
"May the new government continue with the deportation of those who have been radicalised".
photo: Turin prosecutors' office