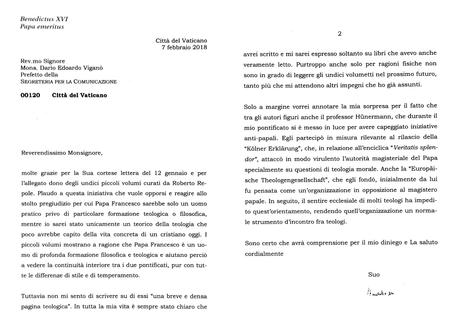 (ANSA) - Vatican City, March 21 - Vatican prefect for the secretariate for communication (SPC) Msgr Dario Edoardo Viganò on Wednesday resigned over a flap about a letter from Pope Eemeritus Benedict XVI praising successor Pope Francis, part of which was initially omitted.
Viganò allegedly doctored the letter and described it incorrectly in public on the occasion of the release of an 11-volume collection of Francis theological works.
In the letter, Benedict praised the "continuity" between his pontificate and that of Francis, chiding "foolish prejudice" against his successor.
Viganò initially omitted a part where Benedict criticised the selection of German cleric Peter Huenermann as one of the commentators on the collection.
Huenermann had been a critic of Benedict and his predecessor John Paul II. Until the appointment of a new prefect, the SPC will be headed by its secretary, Msgr Lucio Adrián Ruiz, Vatican spokesman Greg Burke said.
"There have been many polemics about my role recently," Viganò said in a statement.
The pope thanked him for his work and for agreeing to take a "step backwards".
Viganò, 55, a Milanese born in Rio de Janeiro, will stay on in the communications secretariate in a lower position, believed to be third spot.
The affair, dubbed Lettergate, has proved to be a boomerang for the pope and, far from placating his conservative critics, has given them fresh fuel against him, Vatican watchers say.