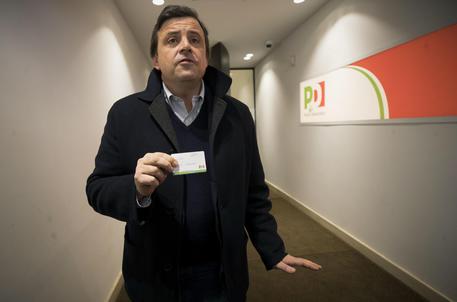 (ANSA) - Rome, March 7 - Industry Minister Carlo Calenda said Wednesday that he would quit the Democratic Party (Pd) if it backed a 5-Star Movement (M5S) government, just a day after he announced he was joining the centre-left group, which is reeling following its dreadful showing in Sunday's general election.
"If the PD allies itself with the M5S, my membership will be the shortest in the history of a political party," Calenda said
via Twitter.
Calenda also denied reports he was eyeing the leadership of the Democratic Party, saying Premier Paolo Gentiloni was the
centre-left group's chief.
Responding to a Twitter follower, Calenda said the PD "has aleader and his job is premier".
Ex-premier Matteo Renzi announced he was quitting as PD leader on Monday.
Some 90% of the centre-left Democratic Party (PD) is against forming a coalition government either with the anti-establishment 5-Star Movement (M5S) or the centre right, Justice Minister Andrea Orlando, a PD bigwig, said Wednesday. Orlando said his "area" within the party, as well as the vast majority of the party, "has ruled out the possibility of a government with the 5 Stars, and with the centre right".

Orlando said only Puglia Governor Michele Emiliano, who got 10% at a party congress, was in favour of joining the M5S in government.
"90% of the PD's ruling group is against an alliance with the M5S.
Orlando added: "there's no need for a a referendum in the PD.
"There's already been a referendum," he said, referring to Sunday's general election. "We're at 18%, only a point above (Matteo) Salvini's League".
Orlando added that the resignation of leader Matteo Renzi, pending the formation of a new government, had been "real" and after that the party would be run in a "collegial" way before picking a new leader.