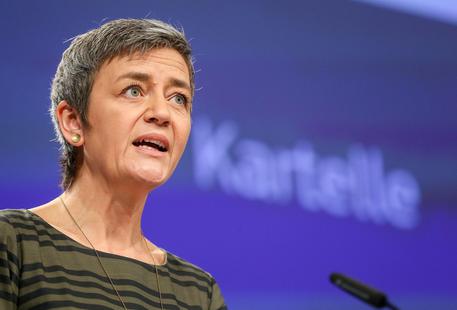 (ANSA) - Brussels, February 21 - Jobs must be created rather than moved, European Competition Commissioner Margrethe Vestager said on the Embraco case Wednesday. As Premier Paolo Gentiloni said no to "fiscal dumping" and Industry Minister Carlo Calenda said scouting for new investors was going ahead, Vestager said the case would become a concern for the European Commission if taxpayers' money was used.
Brazilian fridge compressor maker Embraco, a unit of US multinational Whirlpool, is moving 500 jobs to Slovakia where labour costs are lower and Italy has said State aid may be involved.
"We're here to make sure the rules are respected and make sure that jobs aren't moved but created," Vestager told a press conference about her meeting with Calenda.
"Everyone may have a reason to move, that's not our business, but it becomes a concern for us if taxpayers' money is involved", she said.
"Funds should be used to create new jobs and not to move jobs from one country to another," she said.
Vestager recalled that in 2014 and 2017 the Commission had "reinforced" the rules on State aid to industry.
This was precisely because, she said "(EU) funds must be used to create jobs and not move jobs from one country to another".
"Therefore it is an issue close to our hearts, as shown by the fact that we made stiffer rules".
Vestager earlier said Embraco's offshoring 500 Italian jobs to Slovakia is a serious issue and the EC will assess it to see if State aid rules have been breached. "The Embraco case is a serious thing and the Commission will assess whether the rules on State aid have been respected, but let's not give judgements before knowing the real facts," Vestager said in Brussels.
On Tuesday Vestager had promised Calenda she would be "intransigent" on the case.
Italy argues Slovakia's low labour taxes and other incentives may have broken State-aid rules.
The Brazilian unit of US multinational Whirlpool, which makes fridge compressors, is shutting its plant near Turin with the loss of almost 500 jobs.
Invitalia, the industry ministry's inward investment agency, on Wednesday met an unnamed foreign firm that may be interested in the Italian plant of Embraco, Calenda said. "Scouting is going ahead," said Calenda, adding "I will meet trade unions next week and bring them up to date on developments".
Premier Paolo Gentiloni, for his part, said "no to fiscal and social dumping in the EU".
He said this was why the government had made the Embraco issue "an exemplary case". Earlier Economy Minister Pier Carlo Padoan said the European Union must be "severe" if Embraco's moving production from Italy to Slovakia involves State aid on the part of the eastern European country. "I have great confidence in the competence and objectivity of Vestager," Padoan said.
"If there is State aid (allowing low labour costs), as is possible, I expect the Commission to take severe measures" because State aid "is a serious violation of the internal market", he said.