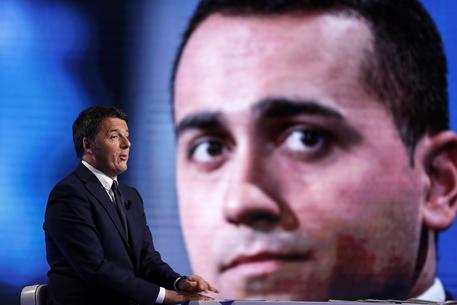 (ANSA) - Rome, February 15 - Anti-establishment 5-Star Movement (M5S) leader Luigi Di Maio upped the ante in the March 4 election campaign Thursday by challenging parties to agree to the first of a series of "convergences" for a possible post-vote M5S-led government. Meanwhile, as Democratic Party (PD) leader and former premier Matteo Renzi claimed the high ground on anti-Fascism, three-time former premier and centre-right Forza Italia (FI) leader Silvio Berlusconi said he would come out with the name of FI's premier candidate before March 4.
Di Maio on Thursday proposed the first move he thinks parties can "converge" on after the general election, halving parliamentary salaries. "Today I propose the first of a series of issues for a government convergence," he said. "All parties should now sign this act in which they vow to to vote the bill halving the salaries of MPs and introducing precise billing of reimbursements," he said.
Writing on the M5S blog, Di Maio said "we have shown that an MP can live a more than dignified life while halving his stipend." He said: "the parties gobble up double salaries and pocket all the reimbursements (for party spending) without providing accounts of anything to anyone".
The M5S styles itself as being unlike the traditional parties, which it says are wedded to perks and corruption.
However it has recently suffered a scandal in which eight members were found not to have paid back money which they should have according to the party statutes.
The case is threatening to spread to the European Parliament, but Di Maio has listed just how much the M5S has given back and says it will turn into a "boomerang" for other parties which are not as "virtuous" as the M5S.
Also on Thursday, the M5S ejected two more candidates for failing to inform them they were members of Masonic lodges.
First Piero Landi was thrown out for not informing them he was in a Masonic lodge, the same reason it ejected Catello Vitiello earlier this week, and then Calabria candidate Bruno Azzerboni was also expelled. "They did not tell the truth," the M5S said in a statement.
"For this reason they cannot stay in the M5S and for this reason, again, they will be asked to give up their constituencies. "We bar them from using the (party) symbol and we reserve the right to act in the appropriate fora with the aim of getting compensation for possible damage to the party's image." Also on Thursday, PD leader Renzi said while marking the anniversary of Italy's worst Nazi atrocity in northern Tuscany that those who are not against Fascism are unworthy of the Italian community.
"Those who are not anti-Fascists are not worth of being part of the Italian democratic community," Renzi said at the village of Sant'Anna di Stazzema near Lucca, where Nazi soldiers killed 560 villages and refugees in 1944.
Renzi was speaking after signing the anti-Fascist citizens' list at the shrine to the WWII massacre, and amid a rise in reported far-right incidents including the racist shooting and wounding of six African migrants in Macerata by a rightist League ex-militant "avenging" the murder and dismemberment by Nigerian drug pushers of an 18-year-old Italian woman.
Renzi went on to say that Italy "should not give an inch" in educating young people about the evils of Fascism.
"Precisely because we believe in the State and in democracy, we vow not to give an inch on educational values," he said.
"When a young man reads Mein Kampf, he can't think of reading any old book, he is reading a book on absolute evil". Meanwhile Berlusconi said he would give the name of the FI premier candidate before the March 4 general election.
"I wanted to wait until the premier candidate himself gave me the go ahead to give his name. I think I will be authorised to do so before the vote," said the 81-year-old three-time ex-premier and media magnate on RAI TV talk show Porta a Porta Wednesday night while signing a new "pact with Italians" on the FI manifesto.
Among the names the three-time ex-premier and media magnate has touted is European Parliament President Antonio Tajani, an FI member.
Berlusconi added that he thought there should be a quick revote with the same election law if there is no clear outcome on March 4.