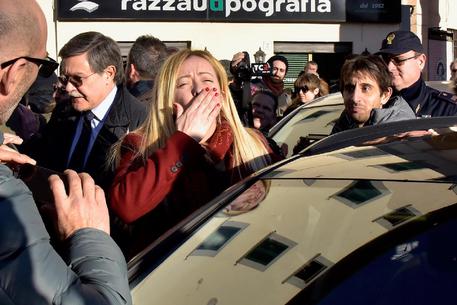 (ANSA) - Livorno, February 13 - Giorgia Meloni, leader of the small right-wing Brothers of Italy (FdI) party, was spat at and hit by a plastic bottle thrown by an opponent in Livorno on Tuesday.
The incidents occurred while Meloni was in the Tuscan port city on the campaign trail for upcoming elections on March 4. She was said to have been unhurt by the flying bottle. Earlier she was greeted by opponents singing the popular anti-fascist song Bella Ciao and a placard bearing the slogan 'Livorno doesn't want fascists. Meloni get out of here!' FdI is running as part of a centre-right coalition including ex premier Silvio Berlusconi's Forza Italia and the anti-immigrant and Eurosceptic League led by Matteo Salvini.