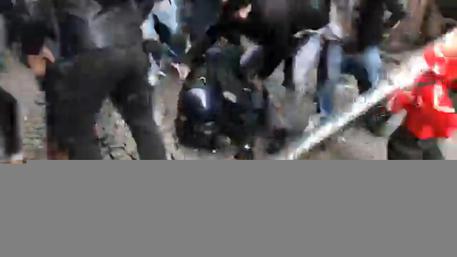 (ANSA) - Piacenza, February 13 - Eleven people have been placed under investigation for clashes between police and anti-Fascist protesters in which a Carabiniere was hurt in Piacenza Saturday, sources said Tuesday. They include those who attacked and broke the officer's shoulder, sources said.
As well as the two organisers, who are accused of instigation to commit crimes and breaking a public-safety law, there are nine young people, from various Italian cities and none of them resident in the Emilian city, who are accused of robbery, grievous bodily harm, resisting arrest, threats and violence against a public officer, police said. Carabiniere officer Luca Belvedere was surrouned and attacked on the ground in an assault that left him with a compound fracture of the shoulder.
The anticapitalist and anarchist squatters from so-called 'social centres' were protesting the opening in Piacenza of a chapter of neo-Fascist group CasaPound.