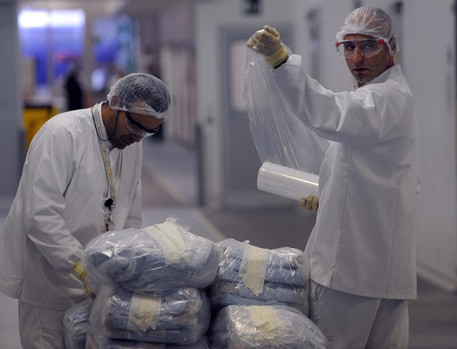 (ANSA) - Rome, January 25 - Italy is having a record flu season and there will have been 7.5-8 million cases by the end of this year's epidemic, virologist Fabrizio Pregliasco told ANSA Thursday. "Considering that now there are already around five million Italians hit by flu viruses, we can estimate that at the end of the season the total cases will arrive at 7.5-8 million," said Pregliasco, a researcher at Milan university and health director of the IRCCS Galeazzi Institute.
He said that this total would be the highest in at least nine years.
"The season is comparable in its virulence only to 2004-5 and the pandemic year of 2009," he said.
Italy's flu epidemic has peaked at over 4.7 million cases so far, the Higher Health Institute's (ISS) Influnet service said earlier Thursday. The number of cases was now gradually declining, Influnet said. In the third week of the year there were 794,000 new cases for a total, since the epidemic started being watched, of 4,728,000 Italians who were confined to their beds by the epidemic.
The incidence is still at a 'high intensity' level of 13.1 per 1,000 but lower than the previous week, when it was 14.5, Influnet said.
The ISS said that since it began monitoring the epidemic in September 64 people had died of the flu.
It added there had been seven serious cases among pregnant women.