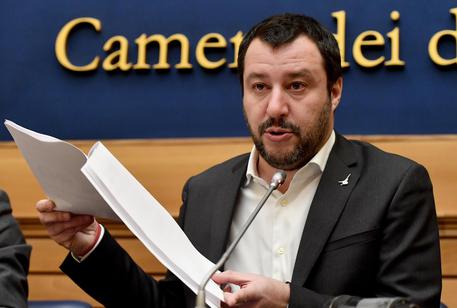 (ANSA) - Rome, January 23 - League leader Matteo Salvini said Tuesday that Italy should not feel obliged to respect the European Union's 3% deficit-to-GDP-ratio limit if it is not in its interests. "The little number three doesn't exist for us if it damages Italian companies and families," Salvini said regarding the deficit limit.
"There are EU regulations that damage Italian families and for a Salvini government they do not exist, such as the Bolkestein and the banks directive".
Ex-premier and Forza Italia leader Silvio Berlusconi, Salvini's coalition partner, told the European People's Party (EPP) on Monday that Italy would respect the 3% deficit limit if the centre right wins the March 4 general election.
Luigi Di Maio, the premier candidate of the anti-establishment 5-Star Movement (M5S), has also mooted the idea of breaking the deficit threshold.