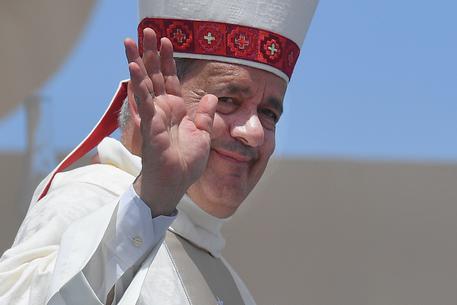 (ANSA) - Santiago, January 18 - Pope Francis said on a trip to Chile Thursday that he had yet to see any evidence against Osorno Bishop Juan Barros who abuse victims accuse of shielding the charismatic cleric who trained him, South American country's most notorious predator priest Fernando Karadima.
But the pope's words were rejected by Karadima's victims and the lay people in Barros's diocese who are trying to have him removed. "When I see some proof against Bishop Barros then we'll see, perhaps. So far I haven't seen any at all," Francis told journalists.
Shortly before the pope addressed the case for the first time, Barros told the press that Francis had been "very affectionate" with him and had offered "words of support".
A group of faithful from Osorno, a southern city, have been demanding Barros's removal for three years.
In February 2011, after several years of a Catholic canonical investigation, the Vatican found Karadima guilty of sexually abusing minors and psychological abuse in Chile.
It sent him to a "life of prayer and penitence" and to "lifelong prohibition from the public exercise of any ministerial act, particularly confession and the spiritual guidance of any category of persons." But the Chilean Church has yet to fully recover from the scandal.
Many of the local faithful are still furious over a 2015 decision by Pope Francis to appoint Barros, who had been one of Karadima's proteges.
Barros has always denied he knew that Karadima was Chile's worst clerical sexual predator.
But many Chileans have shown they are skeptical of Barros's claims. On Thursday Karadima's victims and the lay people from the bishop's diocese harshly criticised the pope's words in defence of Barros.
Victim Juan Carlos Cruz tweeted: "it's not as if I could have taken a selfie or photo while Karadima was abusing me with Barros standing beside him, seeing it all!" He added "These people are mad" and said "it all goes on in the same way, the demand for forgiveness remains an empty gesture".
Juan Carlos Claret, the spokesman for the Osorno lay community, said "the real scandal in Francis's words lies in the fact that he is giving the lie to the victims and not to the man who abused them".
He stressed that Cruz was not the only victim who said Barros knew about Karadima. photo: Bishop Barros