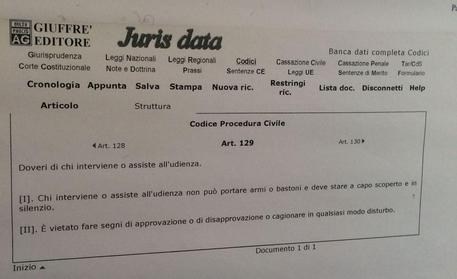 (ANSA) - Bologna, January 17 - A Moroccan-born trainee lawyer was ejected from an Emilia-Romagna regional administrative court (TAR) hearing because she was wearing the Muslim veil Wednesday.
Twenty-five-year-old Asmae Belfakir was asked by the judge either to remove the hijab or leave the courtroom. Belkafir, the legal representative of Bologna's Islamic community, chose to leave.
A note pinned up outside the room said "anyone who takes part in or attends the hearing cannot carry weapons or sticks and must have an uncovered head and keep silent." The Bologna Islamic community said "it is urgent that the competent authorities clear up this case".
Community coordinator Yassine Lafram said "there are no laws banning the veil in a courtroom" and said the judge had voiced an "arbitrary position".
The organisation of young Italian lawyers (AIGA) said the judge's action had been "inconceivable" and "against constitutional principles".
It voiced solidarity with the young trainee.
The leftwing Free and Equal (LeU) party urged the judiciary's self-governing body, the Supreme Council of Magistrates (CSM), to overrule the judge, saying "freedom to express one's religion should be upheld".
But Galeazzo Bignami of Silvio Berlusconi's centre-right Forza Italia (FI) party said those who criticised the judge "evidently don't know Article 129 of the code of civil procedure which lays down that those who take part in hearings must have their heads uncovered". The judge in the case, Giancarlo Mozzarelli, declined to comment. Belkafir, the trainee who was ejected, has a degree in law from the University of Modena and Reggio Emilia, with a thesis on women's bodies and Islamic law.
She was chosen as a trainee by the legal office of the Emilian university.
Some of her statements on these issues can be found on the Internet.